Which ruby gemstone is the best

Which ruby gemstone is the best

Ancient Hindus valued ruby more than any other gems and named it accordingly "ratnaraj" or "king of precious stones."

Its red color purity defines the top-quality rubies, which do not have any violet, orange or brownish overtones.

Rubies will have microscopic inclusions; these are not detrimental if they do not detract from the gem's brilliance and are not eye visible.

The inclusions in ruby, as with other gemstones, will identify its origin; they provide clues to separate natural stones from synthetics, as well as the area in the world where they were mined.

As for other corundums, the vast majority of rubies are heat treated.

The presence of rutile needles as inclusions in the ruby may indicate the ruby has not been treated.

If these non-treated rubies have fine color and good clarity and are well cut, they will command a top price because for their rarity.

Burmese rubies are considered to be the best when they have fine red color; most Burma rubies tend towards a pinkish color.

Unheated Burmese may contain "silk"; silk is very short fine rutile needles that form at 60-degree angles to each other.

If there is a lot of silk, the stone will show a six-rayed star when it is cut into a cabochon. 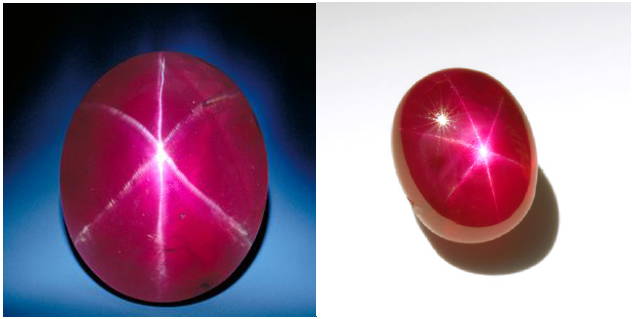 Star rubies are judged by the strength and sharpness of the star, the body color, and the transparency of the stone.

If you are looking for a fine ruby, do not reject stones with microscopic flaws if they do not diminish the brilliance.

Some rubies may be slightly hazy because of microscopic inclusions; each stone must be judged on its beauty. 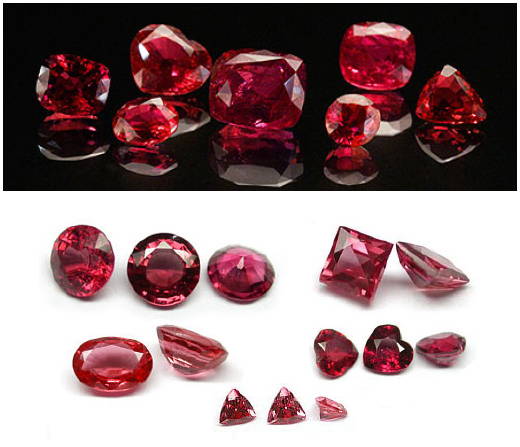 It is not unusual, as for other colored gemstones, to find fine rubies that are not symmetrically cut.

High-quality ruby rough is exceptionally costly, and cut to ideal proportions will often be sacrificed to increase the finished weight of the finished stone.

Generally, the crown portion will be symmetrically cut; pavilions may be a bit crooked.

It is best to buy fine rubies as loose stones to examine the color and cut thoroughly. 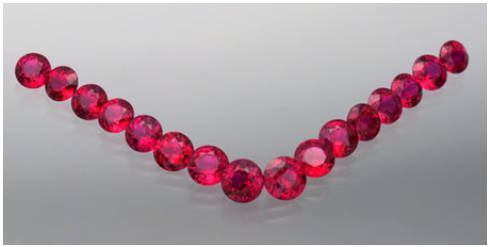 Rubies may have a shallow cut that sacrifices brilliance if the rough material was on the dark side or if the rough did not have sufficient depth.

When deciding to buy, you must look at it face up and judge its overall beauty: an asymmetrical pavilion may not detract from the beauty of the specimen.

This will lower the value even if they are not visible in the face-up position, but if the stone faces up well, it may be a good buy if the price is lower than the price of an un-zoned top color one.

The majority of rubies on the market used to be mined in Thailand near the Cambodian border, but Mozambique goods have, in the last 10-15 years, entered the market in such a significant manner that this locality is now supplying a wide share of the demand.

Mozambique goods are still a bargain compared to Burmese rubies, but the price is on the rise and is predicted to keep on growing in the years to come.

Another advantage of the Mozambique source is that it is still possible to find relatively large specimens, with top quality in terms of color and clarity, at a descent price.

Sri Lanka mines rubies along with sapphires; these rubies usually do not have an intense red color but tend towards less saturated pink shades.

Small rubies under a half-carat in size, are quite plentiful and fall into the low or moderate price range depending on color, clarity, and cut.

Larger stones fall into the expensive per carat price range if the quality is high.

Rubies weighing over five carat sizes are scarce in top grades and even in medium grades.

Large rubies are most often cut into ovals and cushions.

Rounds, emerald cuts, and hearts can be found, but it might take some searching to find a particular quality in a fancy shape.

If you are looking for a ruby, be sure and view the stones under different lighting conditions.

If the stone is dark, it should be less expensive than the truly intense medium red colors.

What if the stone is pink?

Very intense pink colors fall into the expensive range if the stone is eye clean and well-cut, even though, in my opinion, a pink corundum is...just a pink sapphire; not a ruby.

Be careful when purchasing these, as some traders will try to sell under the name "ruby" to reap an extra profit.

Also, if the stone is more violet in hue than red, it truly belongs to the sapphire category.

The same is true for a stone that is more orange than red, even though such stone can easily fetch top dollars due to the extreme rarity. 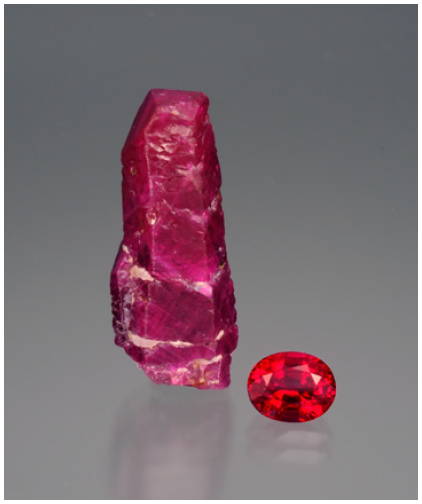