Where malachite is found

Special care instructions: Malachite is soft and somewhat brittle and is sensitive to both heat and acids.

It requires gentle care, so no ultrasonic or steam cleaning should be done.

Use in rings, bracelets, or other jewelry that gets rough and/or constant wear is not advisable.

Use in earrings, brooches, pendants, tie pins is fine.

Enhancements: Malachite is rarely enhanced, although lower quality, less compact pieces may be stabilized with plastic resins or given a surface polish with wax.

Although synthetic malachite has been manufactured for research purposes, it has not been found in the gem marketplace.

There would be little point, as the synthetic material is far more costly than the natural mineral, which is in abundant supply.

The majority of the world's malachite rough comes from The Democratic Republic of Congo (formerly Zaire), Namibia, Russia, and the American Southwest. 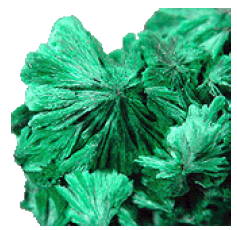 Gems like malachite, which are so stunningly beautiful, yet common and inexpensive, always bring to my mind the "No Respect" phrase made familiar by Rodney Dangerfield.

Pretend for a moment that there were just a handful of specimens to be had, think how we would sing its praises, and long to own one.

Despite its ready availability, though, malachite has a great deal to recommend it to the gem lover, or just to anyone interested in Nature's wonders.

There is disagreement in the mineralogical literature as to the derivation of the name.

Most writers agree that the word comes from the Greek, but there is a split between those favoring malakos, meaning soft, and those who propose another similar looking word meaning the green herb "mallow" a reference to the color.

Our forebears valued the dramatic colors of this mineral not only for use as an ornamental material and a gemstone but also in ground form as a cosmetic (eye shadow).

Unfortunately, although the results may have been beautiful, they were too hazardous to health: the copper content of the dust released from grinding this stone makes it toxic to breathe.

(Today, those workers involved in the mining and fashioning of malachite are advised to wear protective respiratory gear and keep dust to a minimum by running the cut wet.) 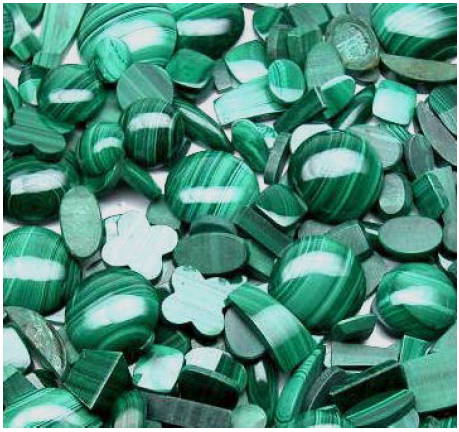 There is evidence that malachite was mined in Egypt as early as 4000 B.C. Early on, it was ground and used as a pigment for paints.

Not until the industrial revolution were synthetic pigments created that could rival its color, and those who restore and conserve old paintings still use the old formula for authenticity.

Invariably associated with deposits of copper ores (and considered to be one of the minor copper ores at 58% copper content), malachite recovery is generally made on a large scale, as a sidelight of copper mining. 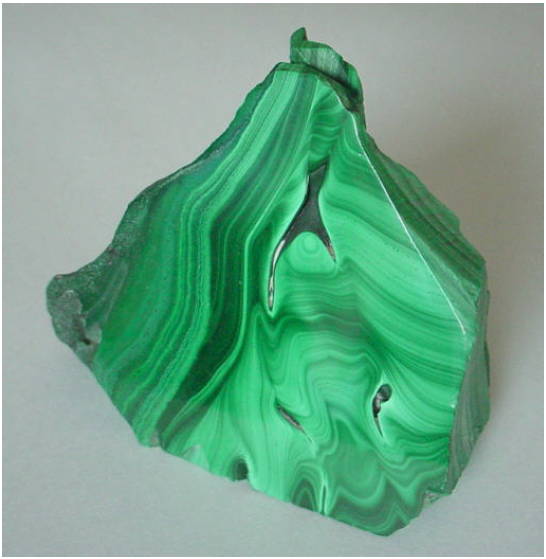 This vivid green gem gets its color from the copper in its chemical formula, and its lovely swirling and concentric patterns from the way it forms.

The primary mode of formation is precipitation from solution, rather than from the crystallization of melted rock or condensing vapors.

Technically malachite is termed a "secondary" mineral, which means that it is created by a chemical reaction between minerals that have already formed, rather than a simple one-step process.

It commonly occurs in "massive" form as a micro-crystalline aggregate, in lumps, or as crusts on other rocks.

The typically banded appearance reflects the waxing and waning of the solutions necessary for the formation and the changes in their chemical content.

Due to its softness, it is easy to shape and carve, but unlike many soft minerals, it generally takes a good polish.

With attributes like this, there is no wonder that it finds so many decorative uses.

Perhaps the greatest malachite appreciators of all time were the Russian Royals of the 19th century who had sets of dinnerware, massive sculptures, vases, and even sections of room paneling made of it.

The Malachite Room of the Hermitage museum in St-Petersburgh is simply stunning! 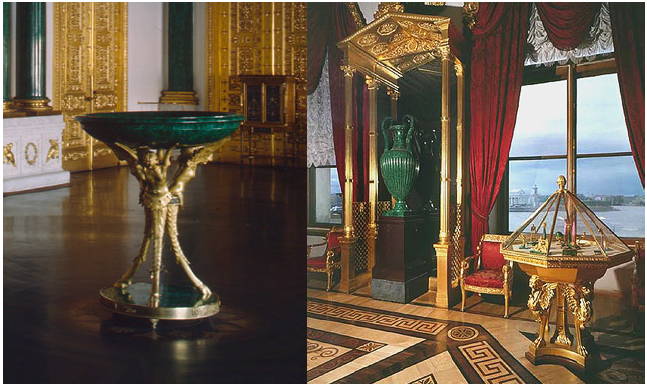 The Victorians were great admirers of opaque jewelry stones, and malachite was one of their favorites, sometimes choosing to set it in gold.

For the most part today, though, this gemstone is used in small carvings, beads and cabochon gems usually set in silver.

The lovely colors and patterns, easy workability, and the ready supply of fine material also endear it to today's lapidary artists for use in intarsia and inlays.

Mineral and gemstone collectors compete to acquire prime malachite specimens in some of its rarer  pattern habits.

Botryoidal masses, stalactites or slices cut from them, and specimens with splayed out clusters of needle-like (acicular) crystals showing a velvety chatoyance are highly prized.

Happily, along with malachite in those secondary deposits, other copper-containing minerals sometimes end up combined in the same specimens.

Malachite is abundant in its typical forms, so even the best specimens are modestly priced.

The value of carvings and ornamental objects will hinge primarily on the size and artistry of the work.