What is zircon stone

What is zircon stone

Special care instructions: Facet edges wear off, caution if putting in a ring

Of course, the two are totally distinct in their chemistry, optical properties, and origins.

A natural gemstone, which occurs in all shades of the color spectrum, zircon is found in many Asian countries, notably Sri Lanka, as well as in Brazil, East Africa, and Australia.

Talking about the last country, zircon is the oldest mineral found on earth so far, with some crystals found in Australia estimated to be over 4.4 billion years old!

Some crystals contain traces of radioactive thorium and uranium, which are used by scientists during their radiometric dating tests.

The first diamond substitute, colorless stones, if well cut, can be convincing but is easily distinguished from diamond by their double refraction and the tendency to wear along facet edges.

Colorless when pure, the zirconium silicate takes on various shades due to trace minerals and impurities.

Brownish stones are often heated either with or without oxygen present to achieve shades of blue and golden yellow.

The rich, slightly greenish blue heated zircons had been marketed as "starlight," but the term never caught on.

Over time, the radioactivity breaks down the crystal structure so that such stones (usually green) tend to an amorphous structure, with a lower refractive index and luster than the crystalline type.

The high birefringence of zircon makes it necessary for the cutter to orient the table of the stone to the optic axis; otherwise, the interior may look fuzzy, due to facet image doubling.

Round stones are often given a "zircon" cut, which is similar to a standard round brilliant cut with an extra tier of facets at the culet.

Although use in rings should be limited to protective settings or occasional wear jewelry, in general, zircon is a magnificent jewelry stone.

Collectors appreciate the many color forms but especially seek out reds and greens. 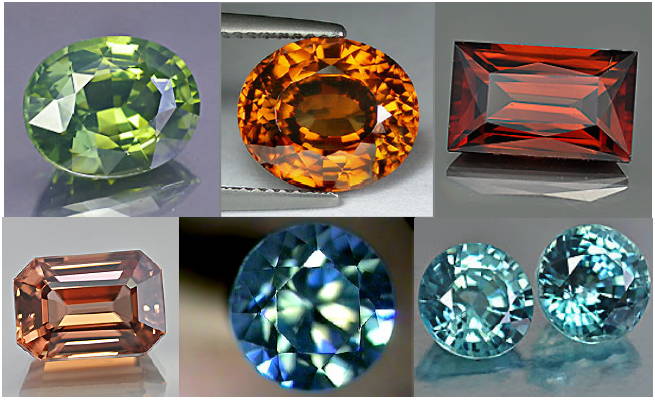