Few gems have attained the popularity of tanzanite in such a short period.

The gem was only discovered in the 1960s, and soon the demand raised the prices to a very respectable level.

The government of Tanzania promoted this gem with an expertise that would make DeBeers proud.

Tanzanite is a beautiful gem, but with moderate hardness and perfect cleavage, it is less than ideal for wearing in jewelry.

Sand papers will scratch them, some polishing compounds can even wear of facet junctions and corners, it can easily be chipped or broken during setting process... So, jewelers beware!

Its closest look-alike, iolite, wears much better and costs less.

Therefore, much credit has to be given to a world-class promotion of this gemstone.

The source for tanzanite is one small area in Tanzania.

All the upper layers have been worked, and the latest sources are from substantial depths.

The mines closed right after the 1998 Tucson show.

None of the local miners will go back into the holes, so a foreign crew would have to be brought in.

Several large corporations have looked into taking over the mines, but none have attempted it because the cost is too high.

Even though the supply diminished considerably, the demand for tanzanite remains high.

New sources have been discovered that are somewhat removed from the original source.

However, the deposits are small, and the production is not nearly enough to equal demand.

Prices have skyrocketed and are expected to remain high for several years.

They will not go down until the demand for this gem finally settles.

Tanzanite is a variety of zoisite, which is a member of the epidote group.

The particular coloring that distinguishes tanzanite is only found in Tanzania.

As it comes from the ground, it is primarily brown, although many stones show some purple. 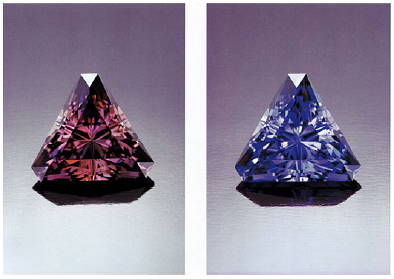 Brown (zoisite) to blue tanzanite by the heating process.

The quality of rough can be evaluated by its tone, (its relative lightness or darkness.)

The tone doesn't change during heating; it just goes from brown to purple and blue.

So the darker the tone before heating, the higher quality your finished goods will be.

After heating, most tanzanites are just purple, with approximately 1/3 of the pieces showing blue in one direction.

About half of these will be oriented so you can get maximum yield cutting for the blue color or about 1/6th of each lot.

Every once in a while, you will also find a very rare green tanzanite.

Before the primary mines closed, they brought a higher price.

Now the distinction between blue and purple gems no longer has a substantial effect on the price. 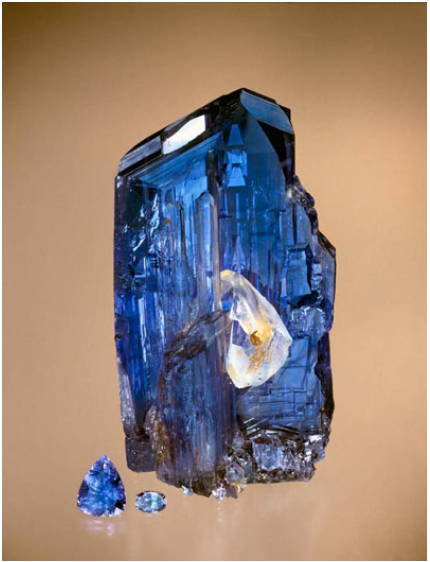