There are 6 main factors to keep in mind when determining a pearl's quality and worth: Nacre, Luster, Surface, Shape, Color, and Size.

Nacre quality is usually broken up in three categories:

The nacre is generally uniformly thick enough that you cannot see the nucleus, the bead placed in the oyster or mussel to cause it to create nacre.

A slight "blink" or glimpse of the nucleus is permissible.

• Nucleus Visible - This pearl shows strong blinking, a darker and lighter flickering when you rotate it.

The flicker of the dark is the nucleus, which can be quite noticeable in thin-nacre pearls.

The thin nacre on these gems never developed that glow that makes a pearl special.

Note: If dealing with quality pearls, they should fall into the "acceptable" category.

Pearls that are chalky, dull, or blink aren't as attractive as gleaming and solid, but they also won't be as durable.

They and their saltwater counterparts with thick nacre will look beautiful and last for many years.

Pearls with thick nacre have more of a chance of having a high-quality luster.

The arrangement and translucence of each nacre plate determine the luster.

Some thick-nacre pearls lose points when it comes to value because they don't have a high luster.

Luster is what makes pearls unique, so it is often the key to determining a pearl's worth.

No other gem reflects light the same way as a pearl.

Pearls with less luster are much less valuable than ones that have a spectacular sheen.

Most pearls with poor luster never make it to the gem market.

They are used in products for the cosmetic or pharmaceutical industries.

So shiny you can see yourself

A high-luster pearl will be so shiny that you will see objects in it, like a spoon.

A pearl with poor luster will reflect images poorly or not at all and will look dull. 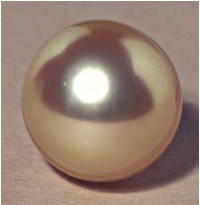 The winner in the luster category

Akoya pearls are considered the finest when it comes to luster.

They almost always beat even their finest competitors.

The theory behind why Akoya pearls consistently have such beautiful luster is water temperature.

The water in Japan and China is cooler, and pearl experts believe that cold water causes the nacre plates to take longer to develop, which increases the chances of excellent luster.

Although Akoya pearls reign when it comes to a glass-like finish, some prefer a more satin-like luster of South Sea pearls.

This softer look is often just as beautiful.

No two pearls are alike, and one of the factors that make each different is its surface quality.

Virtually no pearl is perfect, and any flawless specimens are treasures.

The majority of pearl buyers will have a degree of surface imperfections.

Pearl aficionados know that even the finest pearls will have irregularities on the surface.

The key factors to surface quality irregularities are how noticeable they are and if they seriously affect the pearl's durability. 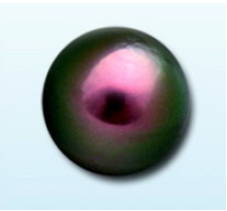 Serious surface quality issues are usually chips and gaps, which will lower the value of even the most lustrous pearls.

These particular imperfections can cause the pearl to crack or peel.

• Abrasions - scratches or scuffs that affect the luster or color of the pearl.

• Bumps - tiny bubbles on the surface of the pearl

• Wrinkles - where the nacre isn't smooth.

A perfectly round pearl is the most sought after and the rarest of cultured pearls.

So precious are round pearls that only 5-10% of a pearl farm's harvest will be even and round.

The rest of the harvest will vary from semi-round pearls to asymmetrical baroque pearls.

Note: The images below are of Tahitian pearls, but these shapes can be found in all pearl types.

Round pearls are perfectly spherical -- the shape most people think of when they think of a pearl. This is the most desirable shape for a cultured pearl and the most expensive. All high-grade Akoya pearls should fall into this grouping.

Button pearls are symmetrical pearls that appear to be flattened or squashed to some degree. This pearl shape is not that common except for freshwater pearls, where the round nucleus is not used.

Drop pearls are symmetrical in shape but have a teardrop shape. These pearls are most often used in pendants and earrings.

Baroque pearls do not have a definitive shape, except that they are non-symmetrical or irregular in shape. Baroque pearls can range from off circle pearls to stick or cross shapes.

Circle pearls are baroque pearls, but as the name suggests, they have visible "circles" or "rings" around the pearl's diameter. This shape of a pearl is most common in Tahitian and South Sea Pearls and is gaining popularity because of their unique look.

Pearls come in a wide variety of colors, also known as "palette of colors."

From whites, yellows, golden, pinks, blues, and black and almost every shade in between.

Pearl color refers specifically to the color of the pearl's body, which is considered the pearl's original color.

The natural color of the pearl is the result of a combination of several factors.

The pearl's body color is its primary color.

This can be white, silver, cream-colored, gold, green, blue, or even black.

The body color is determined by the type of oyster or mollusk that produces the pearl (certain types of oysters generally produce pearls of specific colors), as well as the conditions of the water, and sometimes the kind of nucleus which is implanted to stimulate the pearl's creation.

Overtones are translucent colors, which sometimes appear on top of the pearl's primary body color.

These overtones tend to alter the body color somewhat, as well as adding depth and glow.

A pearl may be white with rose overtones, for example.

Some pearls have no overtones at all.

The term orient refers to the shimmering, iridescent colors, which appear to move and glitter when the pearl is turned.

This phenomenon is caused by how light is reflected through the various thin layers of nacre, which make up the pearl.

Cultured Akoya pearls come in overtones of rose, cream, and ivory - the most popular being rose or cream.

They are larger than the Akoya pearls and are used to create fine pearl strands and ropes.

Tahitian pearls are most often in shades of black and gray.

While a Tahitian pearl has a black body color, it will vary in its overtones, which most often will be green or pink.

When it comes to quality pearls, like most things, size does matter.

A critical factor in a pearl's value is its size, with the larger pearls generally being the more prized.

What size pearl is the best?

It depends on many variables.

The diameter of every pearl is measured in millimeters, varying from 1.5 to 20mm and rounded off to the nearest 0.5 mm.

Pearls in strands are measured differently.

Measurements are taken perpendicular to the drill holes and expressed in half-millimeter ranges, for example, 6 to 6.5 millimeters.

A Strand labeled as a 7.5mm strand will be comprised of 7.0mm - 7.5mm pearls, with the smaller pearls being placed near the clasp.

- The size and vitality of the mollusk that produced it.

- The size of the nucleus.

- The time that the mollusk spent underwater before the pearl was harvested.

The Importance of Size

The value of the size depends on how unusual it is.

Large Akoya cultured pearls are not large by Tahitian standards, but a large one would be of a higher value than a Tahitian pearl of the same size.