Moonstone or "Adularia," an orthoclase feldspar, was initially named for an early mining site at Mt. Adular in Switzerland.

From this tradition, we derive the term "adularescence," which is the optical phenomenon of iridescence, which creates a billowy, floating blue to white light in this gem.

Adularescence is due to diffraction of light as it hits thin, alternating layers of orthoclase and albite within the gem.

Moonstone is one of the relative handfuls of gems with inclusions so characteristic that seeing them guarantees the identity.

Pairs of tiny stress cracks running parallel to the vertical axis of the crystal with smaller cracks aligned along them have been called "centipedes" and are diagnostic of moonstone.

Gems range from colorless through shades of yellow, gray, green, and pink to brown and from transparent to opaque.

Moonstone is a historically significant gem having been valued, especially by royalty, for centuries.

Generally, moonstone is cabbed with a high dome, which accentuates the adularescence.

Those specimens with strong displays often reveal the cat's eyes when cutting this way.

The asterism is rare in moonstone, but when it occurs, the star is four-legged.

Although moonstone has been simulated by milky chalcedony and certain types of man-made spinels, these substitutes are visibly inferior and easily spotted.

Synthetic moonstone has not entered the market. 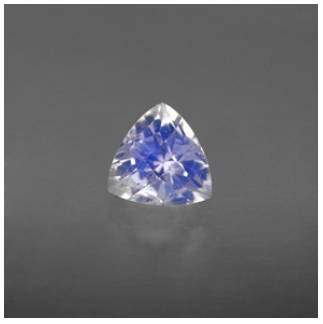 This gem is so lovely that many people enjoy wearing it in jewelry.

Caution must be used in setting and wearing rings or bracelets with this gem, due to the hardness, 6, and slight tendency to cleave.

Brooches, earrings and pendants are quite safe.

Other than refraining from cleaning with steam or ultrasonics, and protecting the stones from hard knocks, no special care is necessary.

In general, the more transparent it is, and the more blue its adularescence, the higher the value.

Large quantities of near opaque material with various body colors are carved into simple "moon faces" and other figures which are available for pennies.

Cabs of a translucent material that are either white or with pleasing body color and adularescence are relatively common in the market and command relatively modest prices.

For cat's eyes and the occasional star, expect to pay in proportion to how straight and centered the line (s) is (are), then the weight of the piece and at last, its clarity.

In rare instances, the schiller phenomenon is multicolored, showing blue, green, and/or orange.

Such stones are quite valuable and are known as rainbow moonstone.

Unfortunately, a lot of low grades, labradorite feldspar is advertised and sold by that name (a misnomer), so most people are surprised by the prices of the real gem grade rainbow stones.

The most valuable moonstones are those which are colorless, transparent, and have a strong blue sheen.

Such stones historically came from Burma.