Is turquoise green or blue

As early as 4000 - 5000 BCE, humans, first in the Sinai region of Egypt, and a millennium later in Mesoamerica and China, were mining and working turquoise into jewelry and ceremonial objects.

It was so highly valued in Egypt, that when high-quality deposits were exhausted, artisans developed a copper glazed ceramic simulant called faience, rather than abandoning the use of that sky blue color in their artwork.

There is only one known deposit in Virginia, where turquoise is found in transparent to translucent visible crystals.

Specimens from that locality are rare and bring a hefty price from collectors.

More typically, turquoise is an opaque deposit in nodules, veins within host rocks, or as shallow crusts on the surface of rocks.

Color ranges through shades of blue to blue-green, to yellowish-green depending on the amount of copper (adds blue) chromium or vanadium, (adds green,) and iron, (adds yellow).

There are rare specimens of blue-violet color that contain strontium impurities.

In general, US mines produce slightly greenish blue, to green gems due to high iron and vanadium content.

Most turquoise rough contains patches or veins of the host rock formed, such as chalcedony or opal, brown limonite, black chert, or white kaolinite. 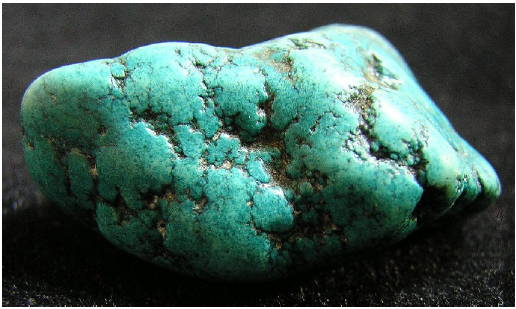 Such a matrix can affect the color and toughness of the stone and its workability for the lapidary or jeweler.

Relatively pure specimens of turquoise might have a hardness of around 5 and be moderately porous.

In general, a high proportion of silicate minerals increases hardness and decreases the porosity, while a high content of clay minerals, has the opposite effect.

On one end of this spectrum, then, we find pieces of hardness 5.5 to 6 that take a bright polish and are minimally porous, and on the other end are pieces of a soft and chalky nature with so much porosity as to be unusable without stabilization. 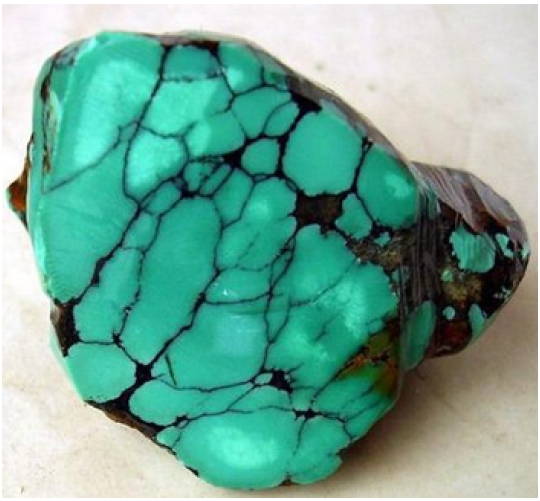 Turquoise occurs, usually in arid regions, where groundwater percolates through aluminous rock in the vicinity of copper deposits.

Like malachite, it is a secondary mineral that forms through the interaction of pre-existing minerals and their solutions.

Historically the finest material was obtained from mines in Persia (Iran), and there is still considerable production from that area.

The majority of today's commerce in turquoise is primarily from North America and China.

Its name, from French, means "Turkish stone," a reference to the long history of imports of Persian material, through Turkey and the West.

The US deposits are almost exclusively limited to the Southwest, with Nevada home to a more significant number of mines than Arizona, New Mexico, and Colorado.

This is a source of pride for Nevada, and turquoise is, in fact, its official State Mineral.

Historically, and to a large extent today, the most admired stones are those of a fine robin's egg, or celestial blue color, with no visible matrix, (this shade is an indication that no iron and little vanadium is present).

Sometimes referred to as "Persian grade," turquoise of this sort is still produced in Iran, but has been supplemented by similar stones from the US, particularly those obtained from the Sleeping Beauty Mine near Globe, Arizona.

In the Middle East, it is traditional to set turquoise in gold, sometimes with diamonds.

The Victorians also greatly admired turquoise, and generally set it in gold as well.

In the US, though, turquoise has had a long historical association with silver jewelry.

Long before the arrival of Europeans in North American, the native inhabitants had an appreciation for turquoise, which is still strong today.

The significance of this gem for some tribal groups rivals the importance that the ancient Chinese gave to jade.

Such was also true in South America, and the early Spanish invaders recorded their surprise in finding turquoise to be more highly valued by the native people than was gold.

During the 1960s and '70s, there was a burst of admiration for turquoise among the US population, mainly as found in Native American jewelry.

After reaching the heights for a few years, this fad crashed amidst scandals involving simulants, imitations, and "Indian" jewelry (even sold by some Native Americans) made in Asia.

The popularity of this gem is now again at stratospheric levels.

This is due to a combination of some well-known modern designers favoring the stone and aggressive promotion by home shopping channels and fashion magazines.

Although still widely available in traditional silver Southwestern style pieces, more and more designers emulate the ancient Persians and the Victorians and set pieces in gold.

The highest turquoise grades are used for cabochons, carvings, and inlay, with the lesser grades finding use as polished beads or natural "nugget-style" beads.

Among those who prefer the look of turquoise with visible matrix, the highest regard is generally given to the material with an even, interconnected patterning of black matrix veins.

Stones of this type are referred to as a "spider web" turquoise. 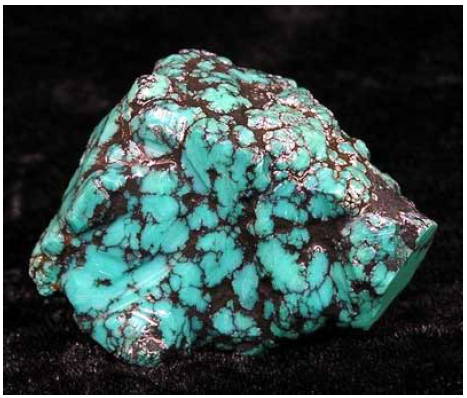 There are numerous enhancements and simulants in the marketplace.

All but the highest turquoise grades may be "stabilized" by a pressure infusion of wax or epoxy resin.

Small, porous pieces are sometimes pressed together with a resin binder to make a stabilized mosaic.

A relatively new electro-chemical enhancement called the "Zachary Process" has recently been promoted as an alternative to traditional stabilization and is said to increase durability and evenness of color.

Some large retailers are now marketing gems treated in this way under proprietary brand names.

Turquoise itself is infrequently dyed, but the white and grey-veined mineral, Howlite, accepts dye readily and is commonly found for sale.

Unfortunately, not all the dyed Howlite offered is properly labeled as "faux" turquoise.

Howlite is sometimes sold in its natural state with the misnomer "white turquoise," but makes no mistake about it; there is NO such thing as white turquoise!

Also, numerous non-mineral imitations such as plastic, ceramic, and glass are offered with or without a matrix.

Synthetic turquoise is also available; the Gilson Company first produced the most well-known type of which in 1972.

A recent import from China, which is being sold as "yellow turquoise," has been featured at some shows and by some retailers.

The natural color is a light yellow-green, but buyer beware, as some very bright sunshine or butter yellow dyed pieces are being offered without much effort to discriminate them from the un-enhanced material.

The only natural gem with which turquoise is likely to be confused is variscite, which can look similar to green turquoise.

Variscite and turquoise, in fact, sometimes occur together in a rock which has been dubbed "variquoise," which brings a premium price for its attractive patterns and combinations of colors.

As a gem material turquoise has its limitations: it is relatively fragile, porous, and susceptible to heat and/or chemical damage.

Turquoise averages 18 - 20% water content and, as the gem is heated, (perhaps from an unwary jeweler's torch), that water is progressively lost until at 400 degrees C. the structural integrity of the mineral is destroyed.

Few deposits of material are of such a fine-grained and compact nature that they take a good polish.

For these reasons, the majority of turquoise found in commerce today has been enhanced in one way or another.

Even top grade, otherwise natural, stones are often given a surface coat of paraffin wax to seal them and enhance the polish.

Skin oils and cosmetic residues are prime culprits in changing and darkening the color of turquoise gems.

Due to this stone's properties, it is best to make turquoise rings and bracelets occasional wear items and protect all turquoise jewelry from heat, chemicals, and shocks.

So, no ultrasonic or steam cleaning, and wash only with mild, lukewarm soapy water and a soft brush, and wipe pieces with a damp cloth after wearing.

There is an avid collector market for turquoise, with sibling rivalry amongst the various enthusiasts who see virtue in different colors, matrix variations, and mine sites just as no gem collection would be complete without several representatives of this species, so no jewelry collection should be without at least one piece featuring this well-beloved December birthstone gem.

Evenness and saturation of color are the essential considerations in terms of value, followed closely by the degree to which the material is compact and capable of taking a good polish without stabilization.

Among those who appreciate matrix patterns, the beauty of that pattern would be crucial in setting value.

Turquoise can be a real gem bargain, for even the very highest grades of material are modestly priced compared to many other gems. 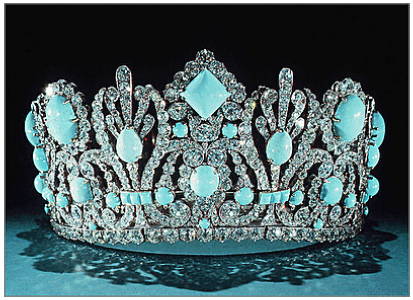