How pearls are made

Pearls are unique among gems, being the only ones found within a living creature and the only ones that require no fashioning before use.

Another distinctive feature is its near-exclusive use by one gender.

Although some efforts have been made to market pearl jewelry to males in recent years, pearls remain the most "feminine" of all gems.

Designated officially as the June Birthstone, it is, unofficially, a near requirement for brides.

Cultured pearls form in certain mollusks (oysters and mussels) at the intervention of man.

A piece of mantle tissue, or a shell bead, is inserted into the animal's interior.

This causes it to secrete a layer of organic material (conchiolin) over the irritant, followed by layers of nacre (nay-ker.)

The composition and structure of this nacre are virtually identical to that which forms under natural conditions.

The thin layers of nacre create a kind of diffraction grating through which light must pass and are responsible for the surface iridescence, called orient, so admired in pearls.

Pearls have both a body color and "overtones" of rainbow hues created by the orient. 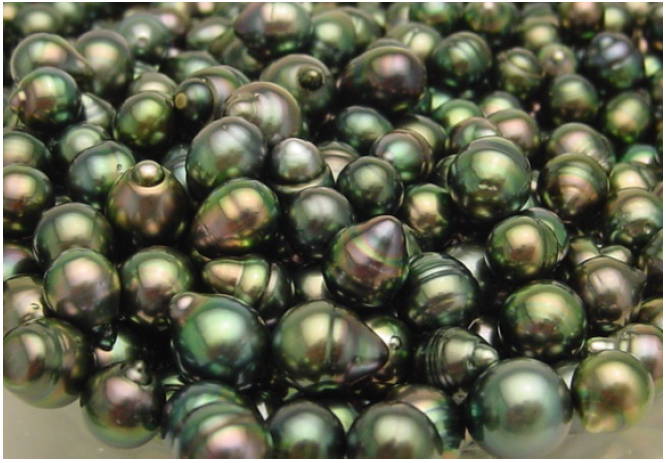 The culturing process takes place over one to three years, depending on the species' conditions and desired outcome.

The commercial operation for raising freshwater pearls originated in Lake Biwa, Japan, at the end of the 1920s.

Various problems, such as pollution and viral diseases, have hampered production in recent years.

Progress is being made in restoring the ecosystems and breeding resistant mollusks, so we should see a return of Japanese pearls to a prominent place in the market in the future.

At present, however, the premier source is China. 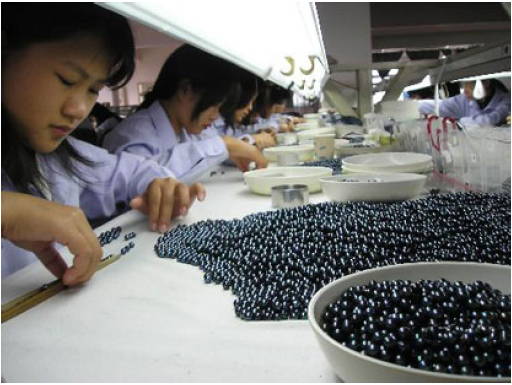 Although once thought of as an inferior product, advances in technique and marketing have made today's Chinese freshwater pearl a true gem.

The US continues to command a share of the market with the pearls produced from areas in the South, especially the Tennessee River.

Culturing pearls is a delicate process that is not guaranteed of success - only 25 - 50% of the altered mollusks produce pearls.

Generally, only a small percentage of the pearls harvested are of gem quality.

The natural range of colors in freshwater pearls is from white to tan to gray, depending primarily on the species used in production.

Enhancements are so common that unless the seller is specifically stated, you should assume a pearl has been at least bleached to remove dark spots of conchiolin that show through the nacre.

More dramatic techniques, such as dying or irradiation, produce pearls with exotic colors such as green, rose, and lavender.

Their shape generally names pearls, so we have baroque that can be any shape, stick pearls, button pearls, seed or rice pearls, rounds, and drops.

There are blister pearls created by attaching a bead or other nucleus to the shell of the mollusk and then cutting it out after it has become nacreous.

Mabe pearls are assembled from blister pearls, which are filled and glued to a shell base.

The term "Keshi" has come to be used for just about any baroque pearl, but in its strictest sense refers to a pearl that spontaneously forms in the oyster during the culturing process, without mantle tissue or bead. 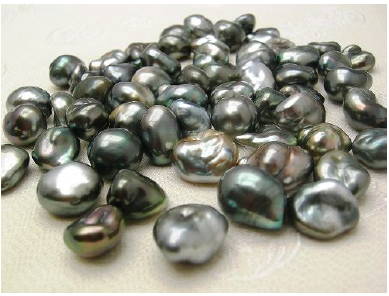 Faux (which is the French word for "false") pearls have been around for a long time and can consist of a variety of materials such as glass, plastic, or shell with various surface treatments meant to simulate the pearls luster.

When testing a suspect pearl, a rule of thumb is to rub it across the surface of your teeth.

Always be careful: some faux pearls, like the one's bellow, look amazingly real!!! 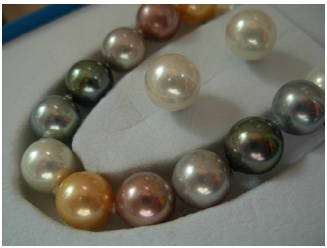 When a low-quality cultured pearl is cleaned and polished and still does not have a good luster, the farmer is left with a few options.

He can sell the pearl at a steep discount, dispose of the pearl; peel the nacre to sell it, reuse the nucleus; or apply a treatment to the pearl that will change its appearance.

If the pearl is the right candidate for treatment, this is the most common and economically sensible approach for the farmer.

There are three main treatments that low-quality pearls undergo:

Dyeing: The use of silver nitrate or other organic dyes to darken the pearl's nacre.

Irradiation: The use of gamma rays to darken the nucleus of the pearl in Akoya pearls and the nacre layers in freshwater.

Luster treatments: A pearl is heated and then cooled or a coating treatment placed on the surface of the pearl to artificially enhance the luster. This is also referred to as "maeshori". 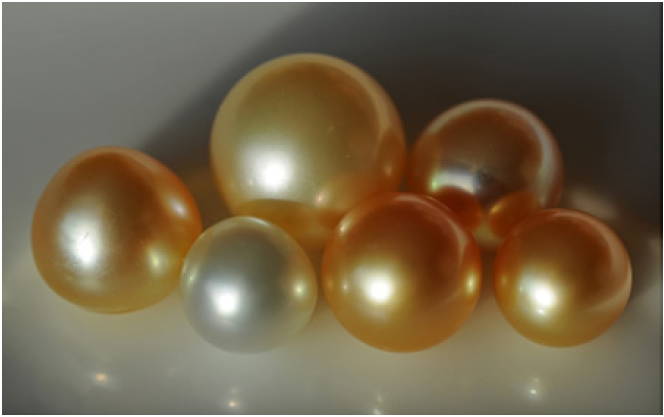 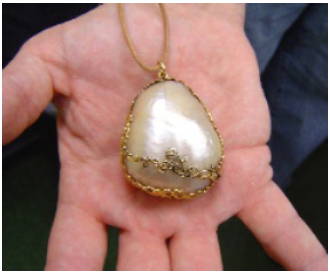 When a sort of irritant, such as a parasite, becomes lodged in the tissue of a mollusk, the animal responds by secreting a calcium carbonate substance, called nacre, to coat the intruder and protect the mollusk.

Over several years, this build-up of nacre forms a pearl.

Natural pearls of any commercial value or desirability are scarce.

Instead, since the early part of the 20th century, cultured pearls have supplanted natural pearls as the most common and available pearls.

Although natural pearls are found primarily in older jewelry from estate sales and auctions, their popularity makes a comeback.

In 2007, a double strand of 68 perfect natural pearls known as the ‘Baroda Pearls’ was auctioned at Christie’s Auction House for $7 million.

Cultured pearls have been given a helping hand.

Today, nearly all pearls are cultured.

By inserting a foreign object into a mollusk, pearl farmers can induce the creation of a pearl.

Cultured pearls can be distinguished from natural pearls through x-rays, which reveal the pearl's inner part. 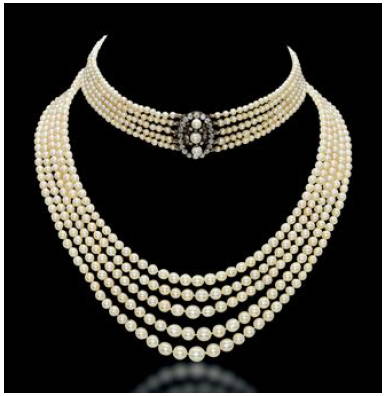 Traditionally, most pearls were gathered from saltwater-dwelling mollusks in the Persian Gulf, the Red Sea, and India, and Japan's coastal waters.

These saltwater pearls are referred to as marine pearls.

Natural saltwater pearls are still found, but the yield is too small to account for any significant market value.

The shape of Saltwater Cultured Pearls

This is because saltwater mollusks are universally bead nucleated.

Saltwater pearls are cultured and prying open a mollusk 2-3 centimeters.

A technician then uses a unique instrument to make a minute incision on the gonad (reproductive organ).

A small nucleus is inserted into this hole, and a tiny piece of mantle tissue is placed behind it.

The epithelial cells in this mantle tissue grow around the nucleus producing a pearl sac.

This is where the pearl grows.

This process is the same for all saltwater pearls cultured today.