Fancy Color Diamonds: An Introduction to The Ultimate Luxury

Diamonds occur by rare accidents of nature in shades of pink, blue, green, amber, or even red.

These rarely occurring colors are referred to as fancies and are evaluated by a different set of color standards than their colorless counterparts.

These standards take into consideration various factors, such as hue and saturation.

Fancy colored diamonds are the most expensive because of their extreme rarity: for every 10,000 carats of diamonds mined, less than one carat will receive a fancy color grade.

Some fancy colors can cost hundreds of thousands of dollars for diamonds of one carat or less!

In the world of diamonds cutting, only a few specialized cutters master the optics and mathematics required to achieve the ideal cut, one that maximizes the face-up color, weight, and brilliance of the stone, all within the constraints set by the shape of the rough diamond.

Thus, every fancy color diamond is a unique work of art, created by nature between 1 and 3 billion years ago and crafted to perfection by a specialist artisan. 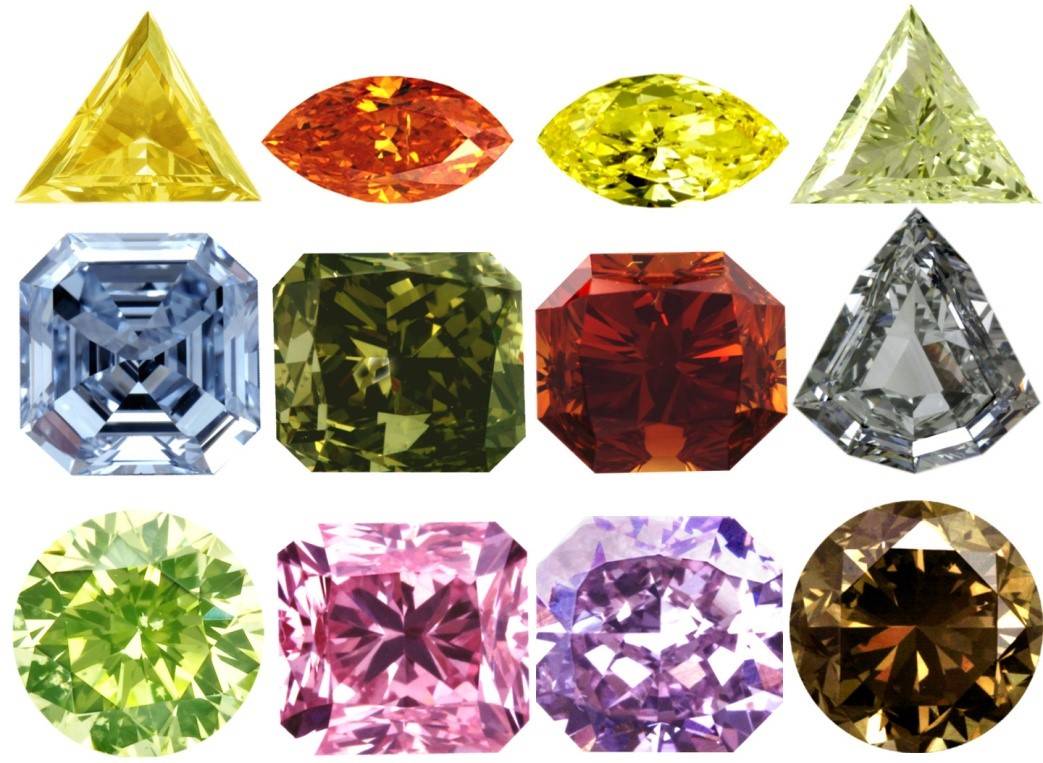 History shows, colored diamonds have been one of the best-performing assets during periods of inflation and currency devaluation.

Since formal records began at the beginning of the 1970s, prices for the highest grades of colored diamonds have increased in value by an average of between 10%-15% per year, with rarer colors and higher grades enjoying the greatest appreciation, even in times of distress. 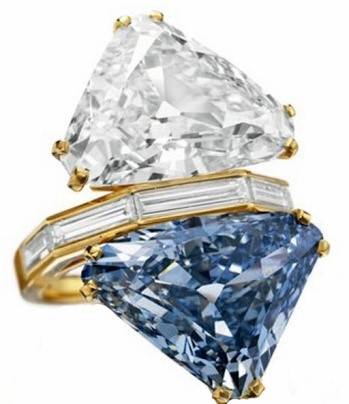 -During the 1970s and early 1980s, when inflation raged, and the economy contracted, colored diamond prices grew at a double-digit rate.

-When the NASDAQ bubble burst in 2000, it held its value.

-And during the currency crises of the late 1990s, investors trapped in Argentina and Russia used them to protect their wealth from the plummeting Argentine Peso and Russian Ruble. 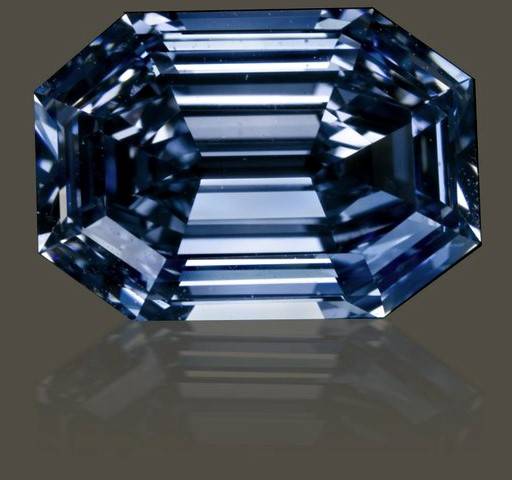 Fancy color diamonds are purchased almost exclusively for the intensity and distribution of the diamond's color.

Color intensity, the deepness or richness of color, is the most important consideration when purchasing a fancy color diamond.

The more intense the color, the rarer, and more valuable the diamond will be. 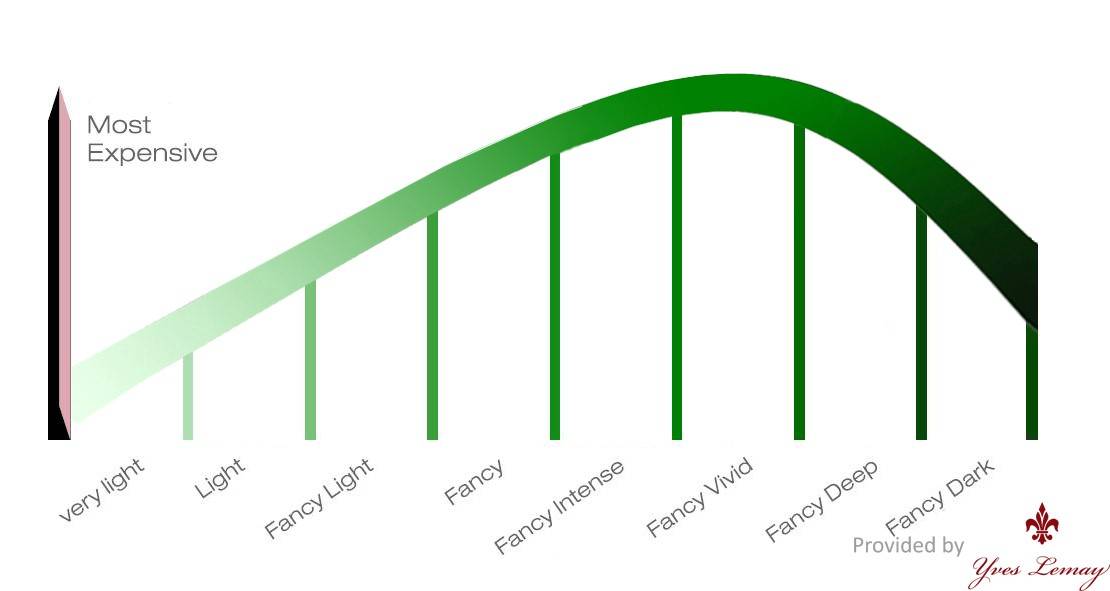 To sum it up, a fancy vivid piece will fetch the highest prices, and a faint or fancy dark one would be at the bottom of the pricing scale.

Here are the different grades of color intensity in pinks as categorized by GIA (same grading scale applies to all colors).

Please consult the GIA scale below for more details on the valuation grading system in fancy color diamonds. 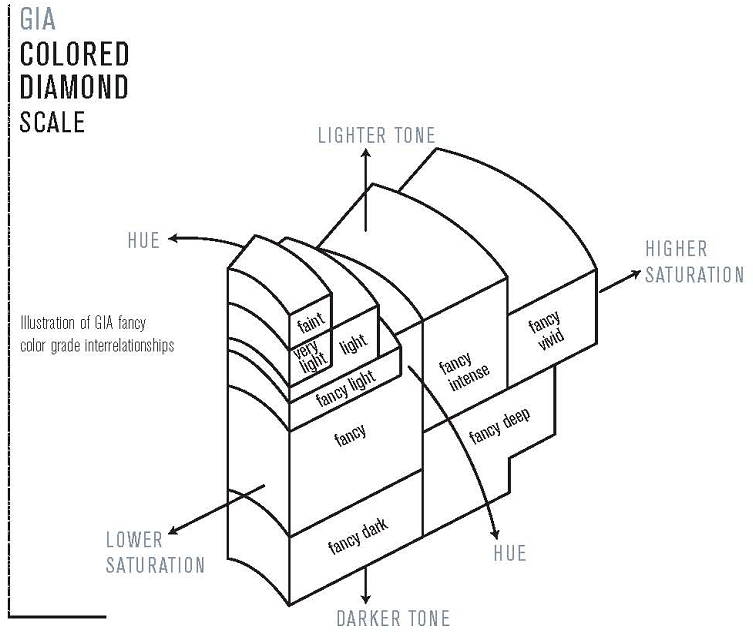 After color grade, the weight has the most impact on the price of fancy color diamonds.

Due to the nature of fancy color diamonds, clarity is less important than it is in their colorless counterparts. This is true because inclusions tend to be masked by the diamond's color.

Fancy color diamonds are primarily cut to emphasize their color. This contrasts with colorless diamonds that are cut to maximize sparkle or brilliance. This being said, fancies can exhibit fire as well, but keep in mind the more intense the color, the less the piece will separate white light into colorful sparkles since intense colors or deep tones will act as a filter when the light travels through the crystal.

It's important to note that many fancy color diamonds are cut into non-traditional shapes to enhance their natural color.

Actually, fewer fancies than colorless can be found in round shape: these very few will command a higher price because of their rarity.

Many of them will be fashioned in Radiant or Cushion cut when made possible by the rough diamond crystal proportions since these possess a deeper pavilion (lower part), which helps to keep the color intense.

Please take note that due to the rarity of fancy color diamonds, a specific shape in a particular color may not be available at any given time. 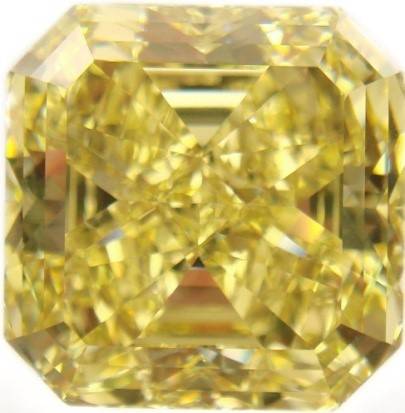 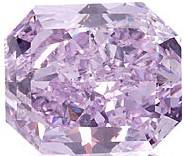 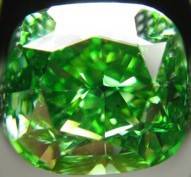 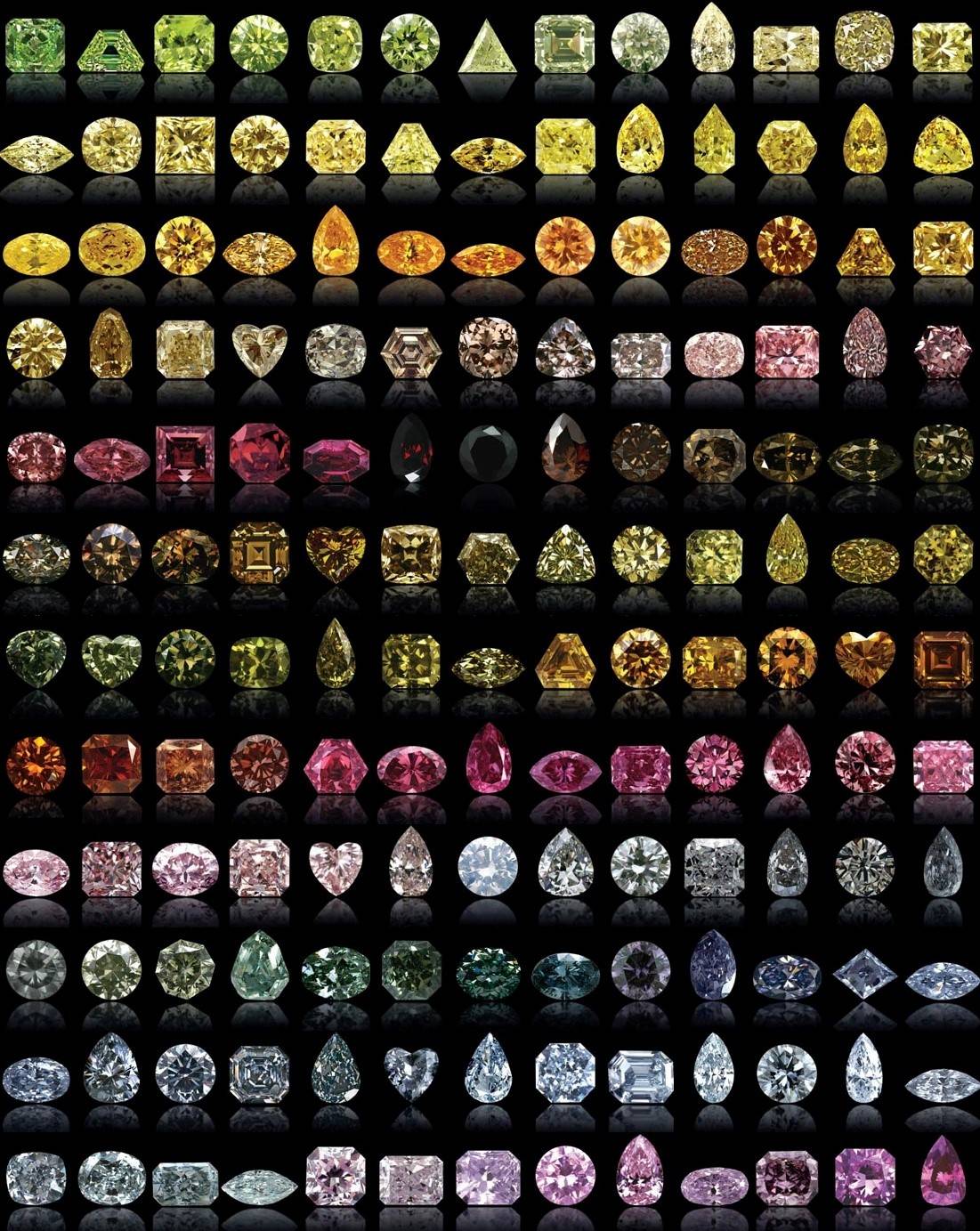 Which colors are the most valuable? 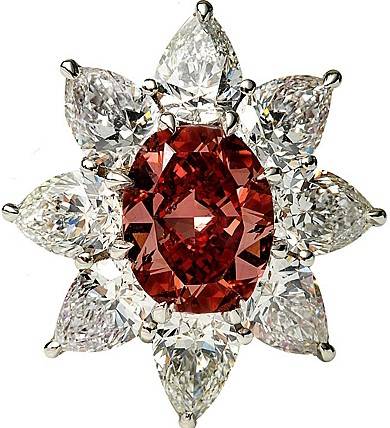 Most fancies will exhibit one or even two overtones.

Overtones are secondary colors that can be found in some diamonds.

You will sometimes see, on certificates, color grading like “Purplish-Pink” or Grayish-yellowish-Green.”

Overtones can sometimes complement a color, or it can detract from it.

There is no robust system as every stone will have subtle variations, but here are some general guidelines that one can follow.

"Canary" yellow is the most popular; it is a pure yellow color.

Brownish-yellow will tend to lower the price; however, deep golden colors can be very favorable as well.

Yellow with a mix of orange can even raise the price up as it is rarer with bright intensity.

Greenish-yellow has a unique lemon-lime color, but generally not as preferred as pure yellow.

Purple/purplish pink is an overtone that most often gives the appearance of a bubble-gum color that is very favorable.

In high saturations (intense/vivid), this modifier can even be more valued than some pure pinks.

Orangey pink in a general context will be less valuable, but some stones with orangey-pink color will have a firm appearance close to intense pink that will be highly valued and sought after.

As an example, a fancy pink that looks washed out may be less valuable than an orangey-pink that is rich with color.

Brownish pink will lower the price as it is less favorable, though many will still have stunning shades to be mounted and look great.

Pure blue diamonds are scarce and most desired.

Green-blue and greenish-blue can be just as important and rare to find, especially in high levels of saturation.

Fancy grayish-blue or gray-blue are tricky ones: these overtones will mostly add to the overall tone of the color, they act by strengthening the appearance of the color.

They can be precious when the blue color is apparent.

As an example, a fancy blue may look light, but a fancy grayish-blue will probably look stronger in the color appearance rather than pureness of hue, which can be more favorable.

These are two colors that, in their purest form, are the most valuable kinds to find.

These are fantastic collector diamonds, one of a kind.

There is a significant increase in price for them to ones with modifying colors that are more available in the market, such as yellowish-green, grayish-green / yellowish-orange, brownish orange.

There is no color scale for natural red diamonds (light red, intense red, vivid red), simply because so very few have ever been graded.

For a diamond to possess a red color, it has achieved its maximum color level.

Pure red is said to be the rarest of all color diamonds and known to be the highest per-carat pricing for any gemstone in a given weight.

A fancy purplish-red may possess a color that is truly remarkable and extremely rare to find too.

While the price may be less than pure red, the overall color appearance can be even more attractive in some, often similar to highly saturated vivid or deep pink color diamonds: these are exceptionally highly valued as well.

Generally, a "vivid" grade is the highest level of color attainable in fancy color diamonds and valued above all.

Due to the nature of color, the line between "deep" and "vivid" can be tough to grasp.

Some diamonds graded vivid will be "lighter" in tone than deep, so a deep that is high in color saturation will have incredible color and priced like vivid.

Which Fancies are best for Investment?

Pink Diamonds are considered for investments: due to the diminishing supply and increasing demand for these stones, prices have soared.

The Argyle mine is expected to be depleted in only a few years from now, making it scarce investment opportunity with rising global demand.

Yellow diamonds are growing in popularity and represent an affordable alternative to traditional white diamonds.

Many customers are seeking high-quality stones (IF, VVS1 or VVS2 clarity) that are far undervalued compared to white diamonds and substantial market growth for yellow diamonds in the future is expected.

Rare, one of the kind pieces like red, pure green, or vivid orange diamonds are virtually irreplaceable and admired by collectors for their beauty and rarity, just like a famous work of art, so the potential for gains is high without competing for availability.

These color-shifting diamonds are some of the rarest gems kept in safes of gemology lovers around the world.

Chameleon diamonds are considered a collector’s item, consisting of a grey–yellow-olive–green combination.

What makes chameleon diamonds attractive is their ability to change color, like a chameleon, through dark storage, or slow heating and cooling.

Chameleon diamonds take on a yellow or olive hue and then revert to their original color in a matter of seconds or minutes.

As for all other color-changing gems, the more dramatic the color change, the higher the price. 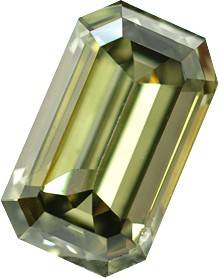 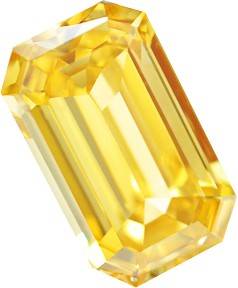