Availability: Up to ten carats

Though emerald is undoubtedly precious, it is certainly not among the new precious stones.

Before the discovery of emerald in Colombia in the sixteenth century, the green variety of corundum was called oriental emerald.

The only source of real emerald known to early Mediterranean cultures was the fabled Cleopatra’s mines in the Sinai Desert.

Two mines, both discovered — or rather stolen from their Native American owners by Spanish conquistadors — have set the standard for evaluating fine emerald in the sixteenth century.

Separated by less than one hundred miles, these two mines, Muzo and Chivor, produce emerald that is superior in all respects to the pale, highly included stones from the mines of ancient Egypt. 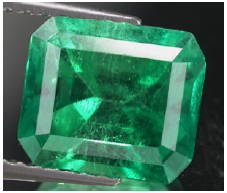 The characteristic features of emeralds include the following:

1- The presence of inclusions:

The presence of cracks, fissures, and other inclusions is a characteristic feature of naturally occurring emeralds, signifying their turbulent genesis, in hydrothermal veins, pegmatites and contact zones of igneous intrusions into the surrounding aluminous schist, shale or limestone.

The presence of three-phase inclusions, solid, liquid, and gaseous, is typical of Colombian emeralds.

Some of the solid inclusions found in emeralds are calcite, parisite, pyrite, albite, tremolite, tourmaline, and biotite.

The type of inclusions seems to vary with the source of the emerald.

The presence of flaws and inclusions had necessitated attempts to reduce their appearance in the crystal, by oil treatment, which is generally accepted in the trade.

The oil used should have a refractive index comparable to the emerald, to render the cracks and fissures invisible.

Such oil is cedarwood oil.

Despite the good hardness of emeralds, which is 7.5 to 8.0 on the Mohs scale, emeralds are somewhat fragile - a character imparted by the presence of flaws and inclusions - and therefore difficult to work with.

The rectangular or square-shaped step-cut with beveled corners, known as the emerald-cut, specially developed for emeralds, reduces the mechanical strain on the crystal, while at the same time bringing out the intrinsic beauty of the stone.

The specific gravity of emeralds is low and varies between 2.67 to 2.78.

The particular gravity seems to change with the source of the emerald.

It also varies with the source of the emerald.

Emeralds have a low dispersion of 0.014.

The low dispersion and refractive index of emerald reduce the "fire" of the stone.

6- Lack of fluorescence in u-v light:

Natural emeralds do not fluoresce in ultra-violet light, and sometimes show a very weak orange-red or green fluorescence.

Emerald, like ruby and blue sapphire, is one of the primary color gemstones.

The most desirable color is the purest green possible, as emerald personifies the pure idea of green.

Although, indeed, a small percentage of yellow (ten to fifteen percent) will enhance or frame the dominant green hue, the purer the green, the finer the stone. 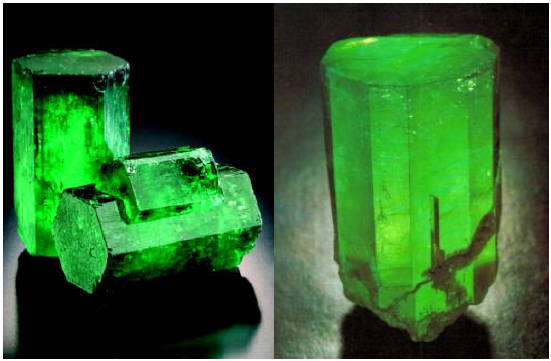 A slightly bluish secondary hue (ten to fifteen percent) adds a richness and warmth to the gem's overall appearance.

For this reason, it is a more desirable secondary hue than yellow.

As always, the gem should be examined in all light sources in order to feel and assess it's color properly.

The color green achieves its optimum saturation at about seventy-five percent tone.

Thus, emerald achieves its most vivid saturation at this tone.

Gray is the standard saturation modifier in emerald.

Gems with visible gray should be avoided.

Sometimes the gray component will be challenging to discern.

Aside from a sense of dullness, the hue of a grayish emerald will appear distinctly cool in incandescent light.

Emerald is most often found with some visible inclusions.

It is rarely eye-clean in sizes above one carat.

Thus, a higher degree of tolerance should be exercised when judging the emerald's clarity.

More attention should be paid to diaphaneity than to strict flawlessness.

The finest emeralds exhibit a beautiful clear crystal that gives the stone a marvelous inner glow.

If the stone has this trait, a few visible inclusions — what experts call "Jardin" (garden) — are easily forgiven.

Such stones are more highly valued than those strictly flawless but lack the limpid quality of the good crystal.

Most aficionados prefer emeralds cut in the traditional step or emerald cut.

This cut has seventeen long, narrow, steps like facets.

A majority of emeralds are cut in this style because it accentuates the warm satiny hue of the gem and, by happy coincidence, is usually the most efficient use of the rough material. 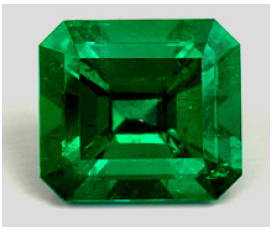 Experts describe emerald’s brilliance as “satiny,” like the luster of a satin ribbon.

Emerald has a softness that contrasts with the “crisp” brilliance of tsavorite garnet, its only rival for the title of “greatest of the green.”

This is partly a function of emerald’s relatively low (1.57-1.58) refractive index and partly a result of cutting style.

A slightly bluish-green emerald with excellent crystal appears to glow with an appealing richness and warmth that is alien to tsavorite.

Emerald is soft, where tsavorite is hard. 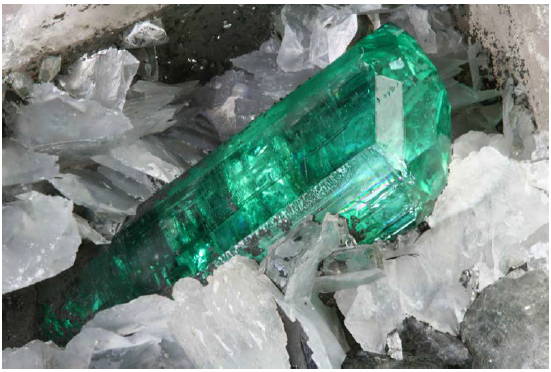 A majority of the emerald available on the world market is treated with various substances to enhance the color and clarity of the stone.

Since the earliest times, various oils have been used to hide cracks to improve the gem's clarity.

This practice has been going on for so long that it has become accepted and is rarely disclosed to the buyer.

In recent years, polymer plastics have begun to replace the traditional oiling.

Opticon is the brand name of a popular polymer with a refractive index that virtually matches the emerald index, making it impossible to detect without sophisticated testing.

Besides, the green dye may be introduced into the polymer filling, which can improve the apparent color of the stone dramatically.

Current industry opinion is that oiling and, to a lesser extent, the use of unhardened polymers is acceptable, though dyeing is not.

However, in practice, many dealers turn a blind eye to both types of enhancement.

Given the high prices of fine emerald, collectors are advised to insist on full written disclosure backed up by an expert laboratory analysis before finalizing an emerald's purchase.

Recently many labs around the world have adopted a uniform seven-step classification to describe emeralds that have been treated with colorless oils or polymers.

The classifications are as follows: none, no significant, faint, faint to moderate, moderate to strong, strong to prominent, and prominent.

Stones that fall into the first four classifications, none to faint to moderate, are rare and worthy of consideration.

Regardless of appearance, stones that fall into the last two classifications, strong and strong to prominent, are best avoided.

The aficionado should bear in mind that these are grade levels of treatment, not clarity.

That is to say; an emerald graded none is not necessarily a flawless stone; it is merely a stone that has not been oiled or treated with polymers.

An untreated emerald can still look like a piece of a broken Coke bottle.

A stone may appear flawless to the eye and be found to have a prominent level of treatment: this means that the treatment has adequately covered up many sins.

Synthetic emerald can also be a problem.

There are several types of synthetics currently available in the market.

The aficionado’s best defense against both treated and synthetic emerald is a certificate from a recognized independent gemological laboratory. 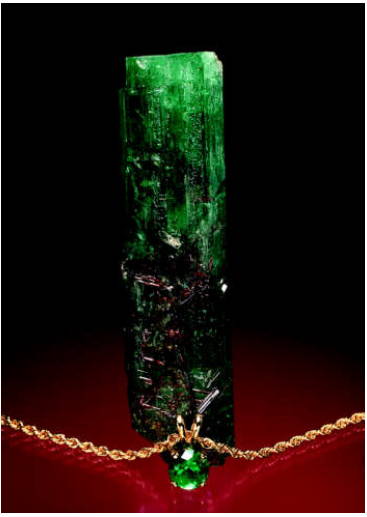