Diamonds are formed deep within the Earth: between 100 km and 200 km below the Earth's surface.

Diamonds are carried to the surface by volcanic eruptions.

The volcanic magma conduit is known as a kimberlite pipe or diamond pipe.

We find diamonds as inclusions in the (rather ordinary-looking) volcanic rock known as kimberlite.

To ensure they are not converted to graphite, diamonds must be transported exceptionally rapidly to the Earth's surface.

Kimberlite lavas carrying diamonds erupt at between 10 and 30 km/hour. 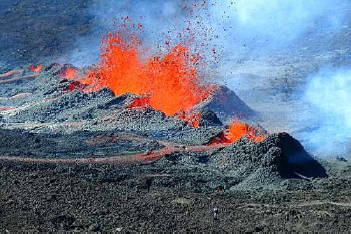 Diamond is the hardest gem on the Mohs hardness scale, and graphite (also made from carbon atoms) is the softest!

Given that both diamond and graphite are made of carbon, this may seem surprising.

How rare are diamonds?

On this 5 grams extracted, only 1 gram (20%) is gem quality, the rest being used in the industry, mainly for abrasive purposes.

Diamond's superior optical properties and hardness have earned this mineral the highest respect in both industry and jewelry.

It has a long tradition of extreme hardness and hence the Greek name, Adamas.

The origin of a diamond may have been uncovered in the twentieth century, but appreciation for diamond has been known since the diamond discovery in India, before 400 B.C.

Historically, diamond has been referred to as the essence of purity and invincibility, a symbol of royalty, and a token of everlasting love.

Diamond is the birthstone for the month of April.

It is a vital economic resource, responsible for developing nations and creating wars. 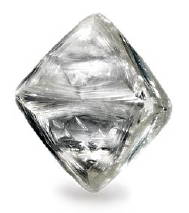 Above: A diamond rough in perfect octahedron shape and a lovely example of included garnet.

Rough diamonds go through many steps before they get to the final, sparkling result to be ready to sell.

Hereunder is an image showing the different stages, followed by each stage detail. 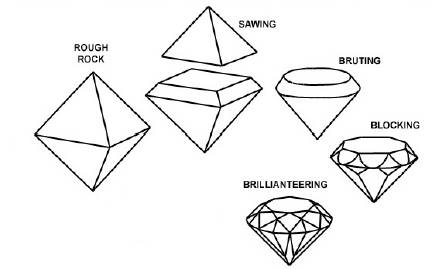 Once a full examination of each rough diamond has been carried out, the stone is marked to decide how it should be cut to yield the highest value.

At this stage, the shape of the rough diamond and the number and location of imperfections must be considered.

The marker or planner must determine the direction of the cleavage (or grain) in the diamond.

Due to the diamond’s atomic structure, it can be cleaved in four directions parallel to the octahedron crystal faces.

If the planner decides the stone should be cleaved, it then goes to the cleaver.

Large diamonds are often pre-shaped by cleaving into pieces suitable for sawing.

For stones that are considerably large and valuable, cleaving is critical as a mistake by the planner or cleaver could shatter the stone.

By using another diamond as a cutting tool, a groove is cut along the line showing where the stone is to be cleaved.

The cleaver mounts the diamond in a dop, or holder inserts a steel wedge into the groove and strikes the wedge sharply with a mallet to split the diamond along its cleavage. 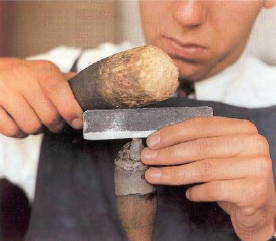 The third stage (or second if cleaving is unnecessary) is sawing.

The specialized saw is a paper-thin disc of phosphor bronze, rotated on a horizontal spindle at about 4,000 revolutions per minute.

By mounting the diamond in a dop, the sawyer clamps the diamond, so it rests on top of the blade.

The rim of the saw is charged with diamond dust so that as the sawing continues, the blade continues to recharge itself with the diamond from the crystal being cut.

The saw can cut through a 1-carat rough diamond in 4 to 8 hours, but if it hits a knot, the process may take much longer. 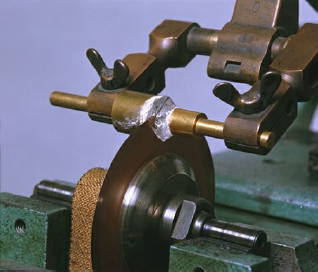 Today many diamonds are cut using laser equipment, which is far more accurate and efficient.

The laser saw revolutionized diamond cutting when it was introduced in the 1930s.

The stone is mounted onto a dop (similar to those used in conventional sawing) for passage through the powerful laser beam, whilst the progress is monitored on a screen.

The burned graphite from the high-temperature laser leaves a black mark on both sides of the stone where the laser cut through.

Therefore, these sides then need to be polished. In some instances, more weight is lost than would have been with conventional sawing.

The most significant advantage of laser cutting is its precision.

There is no cutting edge to wear down, and lasers are less likely to warp the diamond because the heat is confined to such a narrow space.

Since this method causes less friction on the stone, it is also safer – although temperatures are incredibly high.

The following step is called girdling, and may also be referred to as rounding or bruting.

The stone is placed in the chuck of a lathe and as it spins, a second diamond mounted in a dop at the end of a long handle is held against it.

This process slowly rounds the diamond into a cone shape. 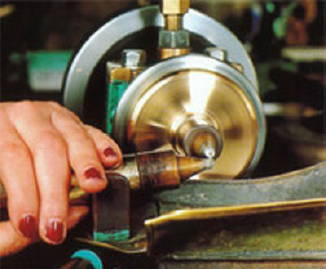 After the diamond has been girdled, it is sent to the lapper or blocker, who specializes in placing the first 18 main facets on a brilliant-cut diamond.

Next, it is sent to the brilliant who creates and polishes the remaining 40 aspects, when the diamond is being cut in the standard 58-facet brilliant cut.

For placing and polishing, the stone is set either in a lead dop or a mechanical clamp and held down on a revolving cast-iron lap (a horizontal, circular disc) that has been charged with diamond dust.

Extra care is required at the faceting stage because the angles of the facets must be exact to yield maximum brilliancy, and their sizes must be accurately regulated to preserve symmetry. 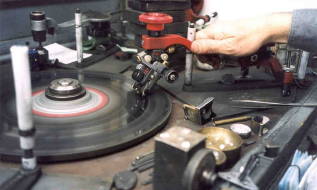 Once the fully faceted diamond has been inspected and approved, it is then boiled in hydrochloric and sulphuric acids to remove any dust and oil.

It is then considered a finished, polished diamond.

Such loose diamonds are then ready to be distributed to wholesalers, manufacturers, and retailers to create products for the diamond shopping consumer.