Enhancements: May be dyed

Agate is distinguished by having multiple colors.

While not usually as rich as other crystalline gems, the colors can be quite vivid.

Agates are sometimes opaque, but they are frequently translucent, and occasionally wholly transparent.

All agates take a wonderful polish and are tough enough for most jewelry uses.

Banded agates are some of the most popular.

They are found all around the world, with Brazil being one of the most productive sources.

Note that many of the richly colored, banded agates you see for sale are dyed. 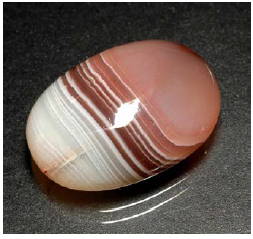 Lace agate is noted for its delicate designs.

Mexico is one of the premier sources for this material. 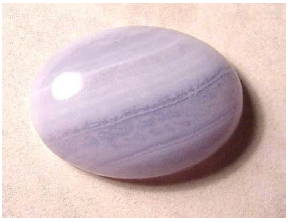 These agates have in common that they contain mineral inclusions which may be any color but share a roughly tree-like or branching form (dendron = tree). 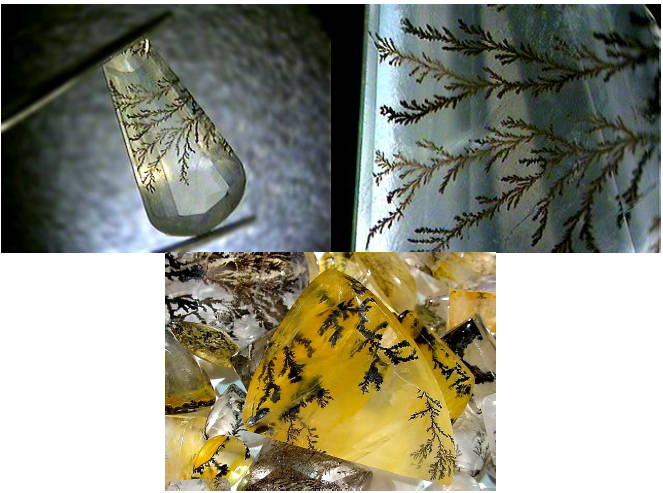 Those that have a more plant or feather-like appearance have been called moss or plume agates, respectively.

Designers often take advantage of the intriguing patterns these stones have to offer.

Fire agate is brown, microcrystalline quartz, which has a botryoidal (grape-like) growth form.

It contains layers of plate-like crystals of iron oxide (limonite) in various planes within it.

The iridescent colors of red, gold, green, and rarely, blue-violet, result from interference between light rays traveling through these thin layers. (We see the same effect when looking at the rainbow colors at the surface of an oily puddle of water; or in the "orient" created by the layers of nacre on the surface of a pearl.)

Fire agate is found only in the American Southwest and Mexico and was not brought into commerce until after World War II.

This, combined with the fact that it is one of the most challenging cab materials to cut correctly, keeps it scarce and mostly unknown to the general public.

Good fire agates are as impressive in their color-play as fine black opal, but far less expensive.

Fire agate is as hard and durable as any quartz making it excellent for jewelry uses, including rings.

The colors and forms are rich and dramatic and generally appeal strongly to men.

Jasper is an opaque, solid, or patterned variety of cryptocrystalline quartz, which consists of very tiny quartz crystals colored by various mineral impurities.

The names of many jaspers can come from their color: bloodstone, green, lemon, from their pattern: orbicular, poppy, leopard skin, landscape, Picasso, or from a place name: Morrisonite, Mookite.

All types take an excellent polish, are trouble-free to care for, and hardy enough for all jewelry uses.

These stones are usually cabbed, sometimes carved, and seldom faceted.

Jewelry's use of jaspers goes back into the early history of civilization.

Various forms of this material are also frequently made into decorative objects, such as ashtrays or bookends.

Jaspers are found all over the world, with specific colors or patterns unique to particular localities.

Most bloodstone comes from India, all Mookaite from Australia.

Some of the most treasured gems show a picture that appears to be taken from nature.

Oregon's Biggs Jasper is now the most common source. 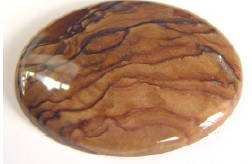 Bruneau Jasper, from Bruneau Canyon, Idaho, used to be the preferred material.

Gems from this locality frequently had blue "skies," which the Oregon material lacks.

Unfortunately, a dam has submerged the mining site, and the material is now quite rare. 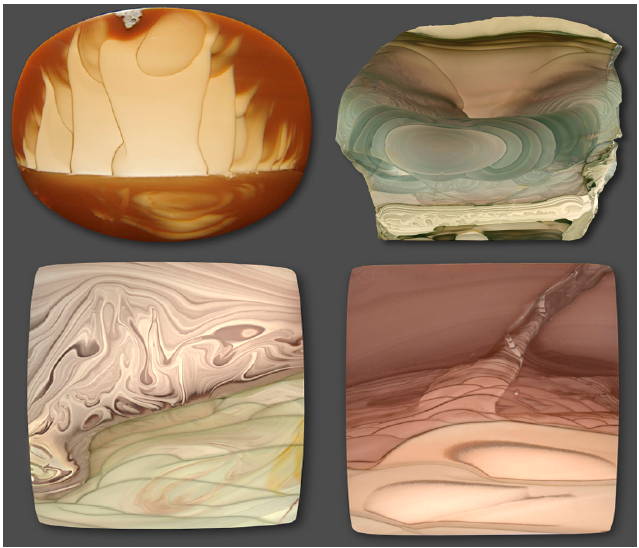 Bloodstone, or heliotrope, is plasma with red and orange spots of iron oxide.

In this description, chalcedony will mean any translucent, cryptocrystalline quartz with a single color, whether it has a special variety name or not.

The various types differ in color due to metallic impurities, such as iron, nickel, copper, and titanium present during crystallization.

This group of stones is usually cabbed or carved, although an exceptional, near-transparent piece may be faceted.

Chalcedonies are tough gems, suitable for all jewelry applications, and require no special care in wearing or cleaning.

The best-known and generally least expensive variety in this group is the carnelian.

It ranges in color from yellow-orange to rich, near reddish-orange, to orangey-brown, and varies from semi-opaque to highly translucent.

Carnelian is the only type of chalcedony which is regularly enhanced.

Iron is the source of its color, and as a result, it can be easily treated, (even by the sun's heat,) to dark red tones as the iron is oxidized.

One can assume that any piece of carnelian had been enhanced unless informed otherwise.

Most commercial carnelian comes from India, but it is mined worldwide.

Apple green chalcedony that derives its color from nickel is chrysoprase.

Marketed as "Gem Silica," this relatively rare, blue to blue-green, opaque to near-transparent material is the most expensive type of chalcedony.

Found almost exclusively in Arizona, its color is due to copper.

Those who take the trouble to seek it out and are willing to pay the price are rewarded with glorious color, (elsewhere found only in the soft gem Chrysocolla,) in a stone that has the durability and hardness of quartz.

This material is the darling of today's gem carvers and jewelry designers.

Piece after piece is featured in magazines like Lapidary Journal, Modern Jeweler, Metalsmith, and Ornament.

One look at the ethereal colors in this group will tell you why.

The various blues, each group with its vocal supporters, are generally designated by place names.

They vary in depth of blue color and degree to which gray or pink hues modify the blue.

As a group, they range from pale to medium tones and in a degree of translucency.

Some pieces have a slight adularescence that enhances their value.

This phenomenon, which reaches its apex in moonstone, is due to light interference from layers of microscopic inclusions and looks like a shimmering, floating, interior light.

Mohave and Mt. Airy Blues originate in California and Nevada, respectively, and are slightly to moderately grayish blue with a light to the medium color range.

Blue chalcedony from Namibia, often called African Blue, varies from grayish to nearly pure blue and from light to medium-dark.

The most unusual type, and arguably the most valuable, is from Oregon.

Its blues are modified by slight to moderate amounts of pink, making a noticeably lavender gem, which nonetheless is called "Holly Blue." 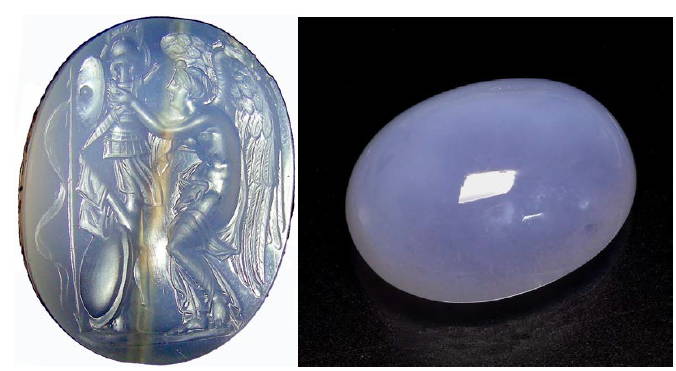 This material is frequently stained by iron, giving it a golden brown color.

We know this material as a tiger eye. Unstained pieces, retaining their original blue color, are called Hawks Eye.

There are also pieces with both colors. It is also possible to obtain some red tiger eye by merely heating gently a normal yellow tiger eye.

Onyx is chalcedony with straight bands of colors.

What you find in the stores is almost always dyed. 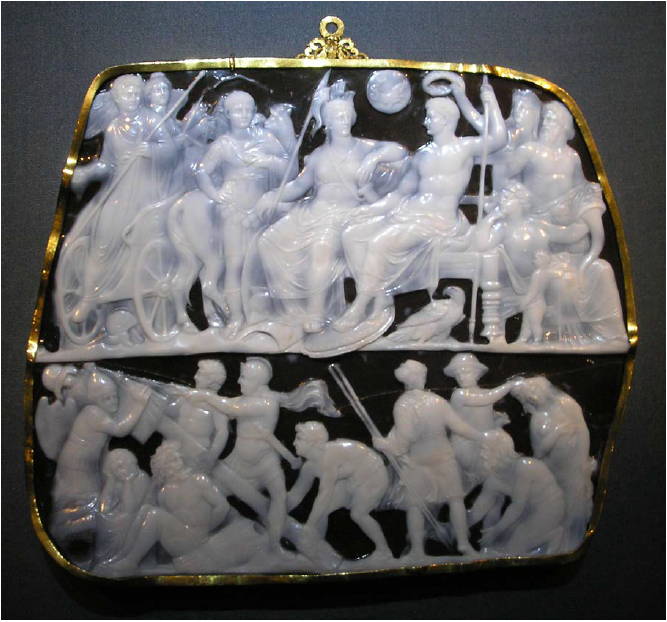