Named for the only locale in which it is found, the Charo River Valley in the former Soviet Union, Charoite is one of the few gems that is so distinctive in its color and patterns that a gemologist can feel justified in making a "sight" identification.

There's no other material likely to be mistaken for it -- at least this is true until a synthetic or man-made substitute comes along someday. 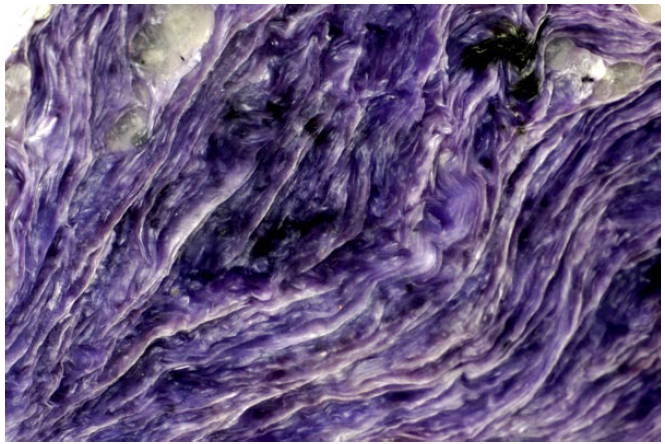 Like lapis lazuli, the gemstone that we call "Charoite" is actually a rock composed of several minerals, including Charoite.

Unlike lapis, though, it is usually nearly pure Charoite mineral, with only slight microcline feldspar, aegirine-augite, and tinaksite.

It is the mineral Charoite that gives this gem its unmistakable purple color, often in the same piece, It ranges from very light to medium-dark purple and from translucent to opaque.

The other distinctive aspect of its appearance is the swirling patterns that form due to its fibrous crystals being arrayed in intricate interlocking patterns.

This gem was introduced to the Western gemstone marketplace as Charoite in the 1970s.

It immediately made a massive impact, both with traditional lapidaries and marketers who used it for decorative objects, carvings, and cabochons, and, soon after, with metaphysical gem enthusiasts for whom it embodies a long list of healing and spiritual attributes.

Charoite is formed from limestone by the process of contact metamorphism.

Since this is a relatively common geologic phenomenon, it is not completely clear why its distribution is so limited.

The particular limestone in that area had unique chemical properties, as did the intrusive rocks.

So far, gemologists have not been able to ascertain the exact chemical or structural reason for its purple color.

To say that the mineral Charoite is a silicate of complex composition an understatement: one mineralogical source describes it as a hydrated potassium, sodium, calcium, barium, strontium, silicate hydroxyfluoride!

As a gem, it is reasonably tough with a hardness between 5 and 6 and no cleavage.

Use in rings or bracelets is probably unwise, but most other jewelry uses are safe. It somewhat heat sensitive, so steam cleaning should be avoided, as should ultrasonic processes.

As with most gems, the best cleaning tool is a soft brush, a mild detergent, and warm water. 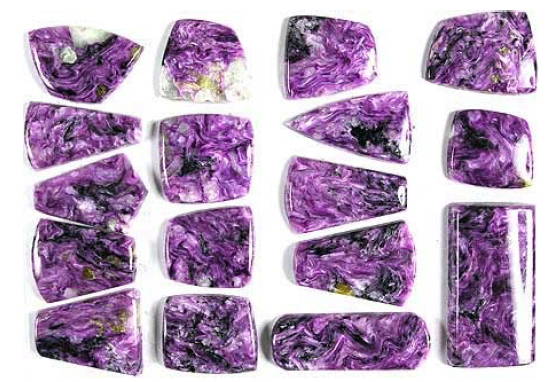 One of the loveliest aspects of the best Charoite gems is a slight to moderate chatoyancy, which gives it a silky or pearly luster.

This attribute, as well as the swirling patterns and distinctive purple color, is well demonstrated by the pieces above.

Charoite is a gemstone bargain.

Look for a lovely pattern, pleasing colors, a good polish, and a shape that appeals to you, and you cannot go wrong. If the piece shows some chatoyancy, that would add to its value. 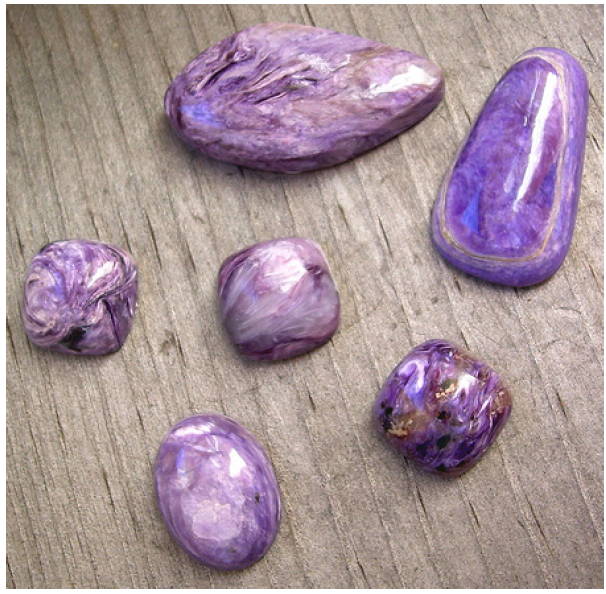