Enhancements: Amber is darkened by heating. If done properly, this also creates the Star spangles effect. Amber can also be dyed to darken the color. 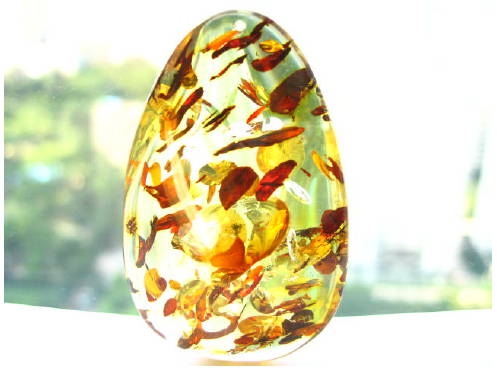 Amber has been in use by humans for thousands of years, possibly longer than any other gem material.

It is fairly common, easy to work with, and a constant wonder to the eyes.

Amber is an amorphous mixture of organic compounds, including hydrocarbons, resins, succinic acid, and oils.

Amorphous means that it has no crystalline structure.

Organic refers to having its origin in living things. 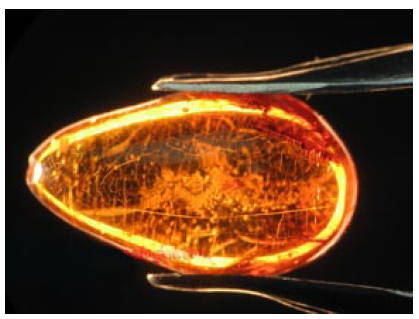 It is commonly referred to as fossilized resin of ancient conifers.

However, it is not a fossil in common sense.

Most fossils begin by having an animal or plant buried in the earth.

Throughout millennia, the organic material is slowly replaced with elements from the mineral kingdom.

Amber, on the other hand, has not had its organic elements replaced.

Instead, the resin has gone through a chemical transformation.

Amber has become a polymer, a natural plastic.

This gem comes in many colors, with the most common being yellow, orange, and brown.

Rarely, you will find amber with a green, blue, or violet tint.

This is due to extreme fluorescence. Here are different colors of amber: 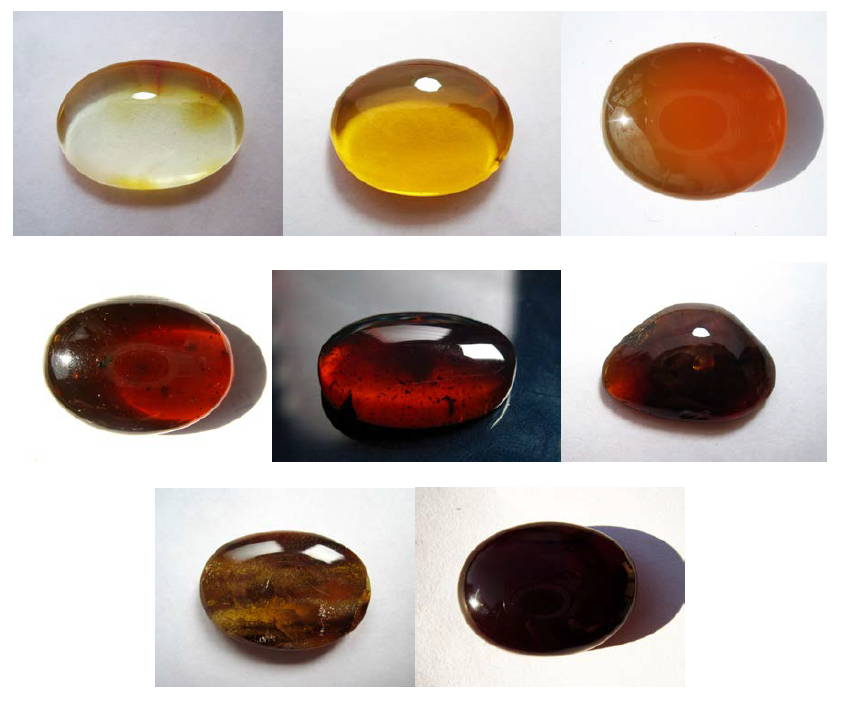 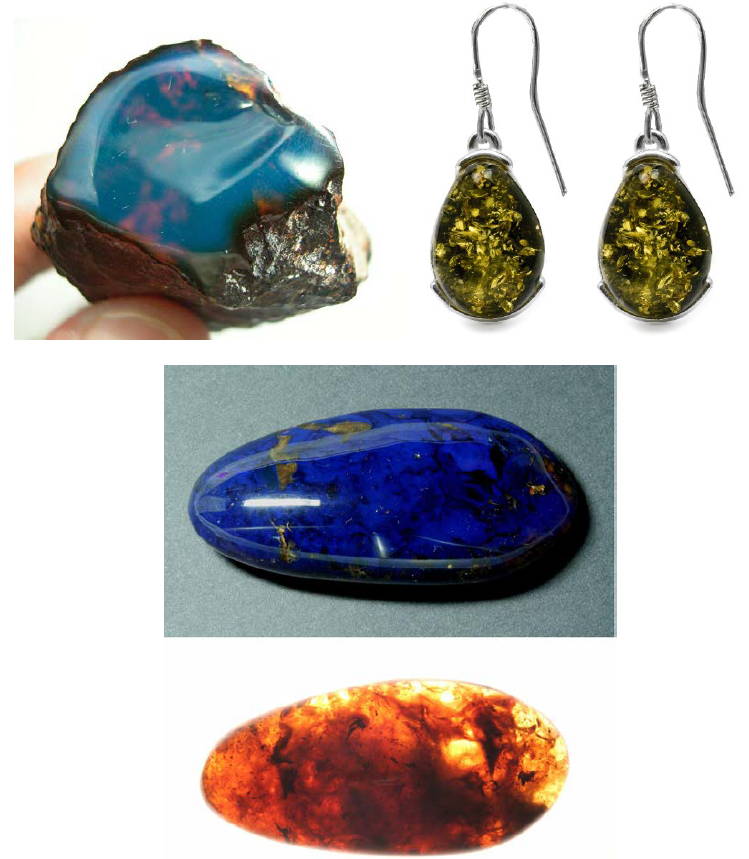 There are several shades of these colors and several grades of transparency.

Jewelry is made almost exclusively from the transparent/translucent material.

The opaque material is carved into a variety of artistic ornaments and useful utensils.

Amber is also burned as incense and used as an ingredient in perfumes.

The gem is known for its inclusions.

They consist of insects, pollen, and plant debris from the time the tree was living.

This offers a remarkable view of the past. In some of the finer specimens, whole termite colonies are trapped.

They have chambers created with webbing.

Some of the "rooms" are nurseries, complete with egg sacks.

Besides the termites, a variety of beetles, spiders, mites, and other insects can be in a single specimen.

Since the movie, "Jurassic Park," the most popular insect inclusion is a mosquito.

However, any visible insect makes a piece highly valuable.

Ancient plant material is of great interest to scientists, but of little value in the jewelry market.

Most of it is in small pieces and not easily recognizable for what it is.

Another popular type of inclusion is "star spangles."

These internal fractures radiate from a central point.

While quite attractive, most are human-induced.

Hence, they do not have the high value of a good quality insect. 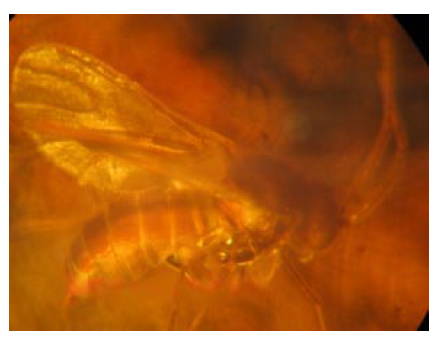 Amber is often confused with copal.

These are very similar materials, with nearly identical origins.

The difference is that amber is millions of years old, copal just a few hundred thousand years old.

There is also pressed amber, or ambroid, that is created by fusing smaller bits of amber under heat.

You can distinguish this with a microscope.

Rubbed vigorously on a piece of wool, it will generate a static charge, enough to pick up a small piece of ash.

When it is warm enough, it also gives off a distinctive odor.

These techniques will not distinguish amber from copal, but they will separate it from plastic imitations.

(They are also great for entertaining inquisitive children.) 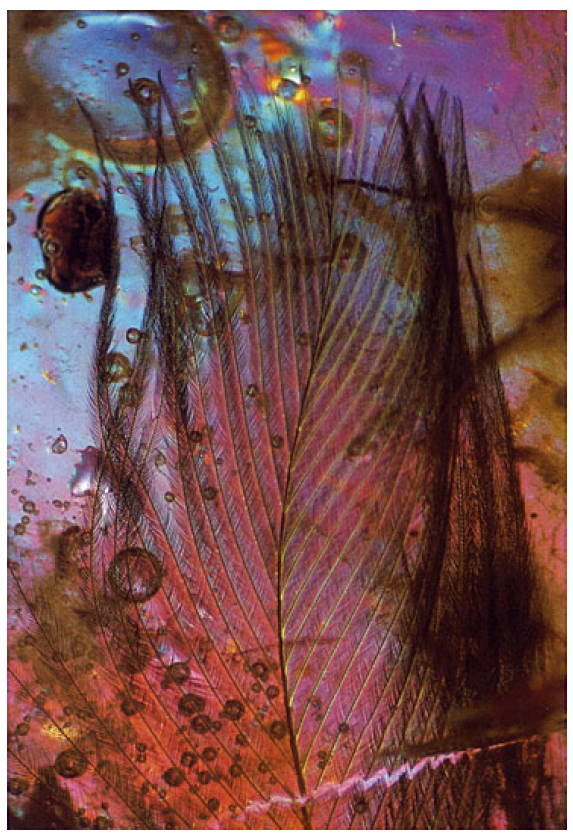 To distinguish between amber and copal is difficult.

They share the same refractive index, specific gravity, and most other properties.

Copal will fluoresce whiter than amber.

That is a judgment call based on having a sufficient number of samples to recognize the difference.

You will have to resort to a destructive test if you are not able to make the distinction based on fluorescence.

On an inconspicuous area, place a drop of acetone.

Let it sit for three seconds, and then wipe it off.

Copal will have the surface damaged by the acetone.

Amber will show little or no change from the brief exposure.

The easiest way to separate amber from its plastic imitations is with a specific gravity solution.

A handy testing liquid can be made by boiling water and adding as much salt as you can dissolve in it.

Most of its imitations will sink.

A few plastics have a density as low as 1.05, and many can be lower than amber if they have air bubbles inside.

So, if your sample sinks, you can be sure it is not amber.

If it floats, you need to determine if it is plastic or amber.

The RI will distinguish plastic if it varies from ambers.

However, since amber and plastic can both have an RI of 1.54, it will not tell you if it is amber.

Since they also share so many visual characteristics, you will probably have to use a hot point to distinguish them.

This is a destructive test, but with care, it can be done almost invisibly.

Just find a place on your gem where a mark would be as unobtrusive as possible.

This is usually on the bottom, an edge, or an area with existing scratches.

Next, heat the tip of a needle until it glows red.

Touch the selected spot just enough to release a tiny whiff of smoke.

Now for the hard part, smell the smoke. If it is amber, the smell is of fine incense.

If it is chemical and offensive, it is plastic.

This is another reason to make your test on as small a scale as possible!